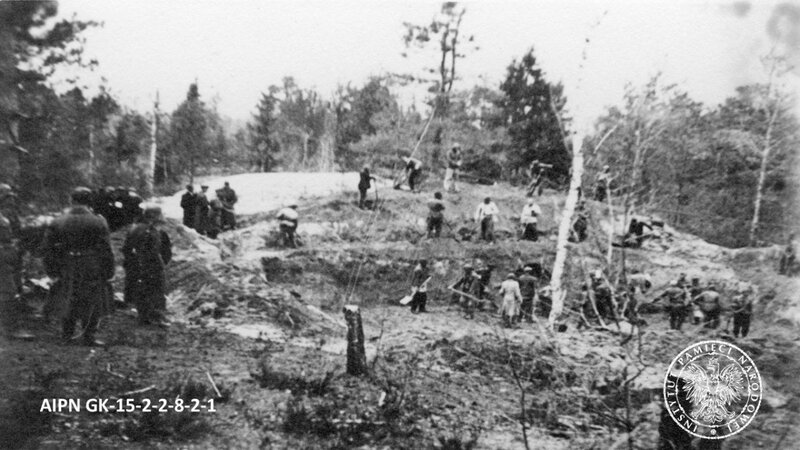 In the summer of 1941, during negotiations on the resumption of Polish-Soviet relations, Prime Minister Władysław Sikorski raised the issue of prisoners of war in the USSR. The Soviets had lowered the number of detainees to 20,000 and hid the fact that they had murdered around 8,000 officers of the Polish Army and many other citizens of the Second Polish Republic in the spring of 1940. On 4 July 1941, British Foreign Minister Anthony Eden informed the British envoy to Moscow Stafford Cripps and US Ambassador to London John Winant that there were "only 20,000" Polish prisoners of war, considering the Soviet explanations sufficient.
In April 1943, the Germans publicized the finding of the remains of Polish officers murdered by Bolsheviks in the Katyn forest. The Soviets responded with a lie about German guilt. On 17 April 1943, the Polish government announced that it had asked the International Red Cross to investigate the matter. Two days later, the Soviets accused Poland of cooperating with Germany, which was supposedly manifested by appealing to the International Red Cross. Winston Churchill and Franklin Roosevelt - in fear of a split in the anti-Hitler coalition and in the face of their will to build post-war order in cooperation with the USSR – distanced themselves from the Polish activities in their correspondence with Joseph Stalin. Despite the fact that the Polish government had withdrawn its appeal to the International Red Cross, on 25 April the Soviet government - emboldened by the attitude of the Anglo-Saxons - broke off relations with Poland.
When making such decisions, the American and British politicians were already aware of the crime which had been committed against Polish prisoners of war. In 1942, Lt. Col. Leslie Hulls from the British Military Mission in Russia gave a report in which he informed that 8,300 Polish officers had disappeared in the USSR. In turn, in May 1943, Owen O'Malley, British Ambassador to the Polish government, submitted a report in which he pointed to the responsibility of the Soviets for this crime. In 1942 Henry Szymański, an officer of the American G-2 military intelligence by the army of General Władysław Anders, informed the headquarters about the unsuccessful search for the prisoners of war in the USSR, and in May 1943 he sent a dossier indicating Soviet guilt.
During the trial before the International Military Tribunal in Nuremberg (1945–1946), Soviet prosecutors tried to convict German defendants for the Katyn Massacre. The Soviet hoax was thwarted by Anglo-Saxon judges. In the USA, the issue of the Katyn massacre was not raised in the media until the late 1940s, while the British authorities silenced it even in the1950s. In 1949, whith the establishment of the American Committee for Investigating the Katyn Massacre this silence was broken.
In the years 1951-1952 Madden's Committee (named after Congressman Ray Madden), set up in the US House of Representatives, investigated the Katyn Massacre and subsequently  confirmed the USSR's guilt. The British government, headed by Churchill, again refused to help the Americans in the investigation.
In Great Britain in the early '70s, knowledge of this crime was propagated by books by Louis Fitz Gibbon and BBC programmes. In 1971, the Soviet authorities even went so far as to protest against this. Nevertheless, in 1972, a conservative British government revealed the O'Malley report. The idea of erecting a monument to the victims of the Katyn Massacre in London appeared. This caused protests by the authorities of the USSR and the Polish People’s Republic. It was finalny erected in 1976, however, not in the city, but on the grounds of a cemetery. The actions of communist governments also brought other effects - in 1976, James Callaghan's government banned uniformed British veterans from participating in the unveiling of the monument and did not assign military assistance in ceremonies. London's attitude changed after the electoral victory of Margaret Thatcher in 1979. Since the 1980s, the United States and Great Britain have consistently spread the truth about the Katyn Massacre. At the beginning there was a collusion of silence. During World War II the governments of Great Britain and the United States did not help the Polish authorities in explaining the fate of "missing" Polish officers.
Witold Wasilewski, Historical Research Office, IPN
Read more: https://ipn.gov.pl/en/news/4134,Katyn-Massacre-educational-materials.html?sid=c792bd7efab49798b0ca1efc79b34742