A monument dedicated to Polish and Jewish citizens of the Republic of Poland, murdered by the Germans, has been erected in Popardowa (poviat of Nowy Sącz)

The monument commemorates the residents of Nawojowa and Kamionka Wielka: Agnieszka and Jan Rumin, Ludwik Borek and Jakub Tokarz as well as the six members of the Jewish families of Kaufer, Neugröschl and Schreiber whom they had been hiding. 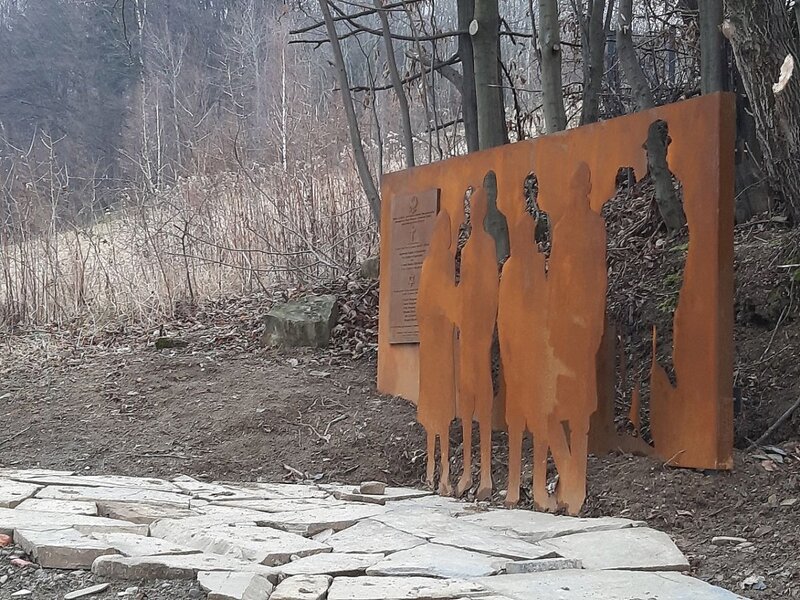 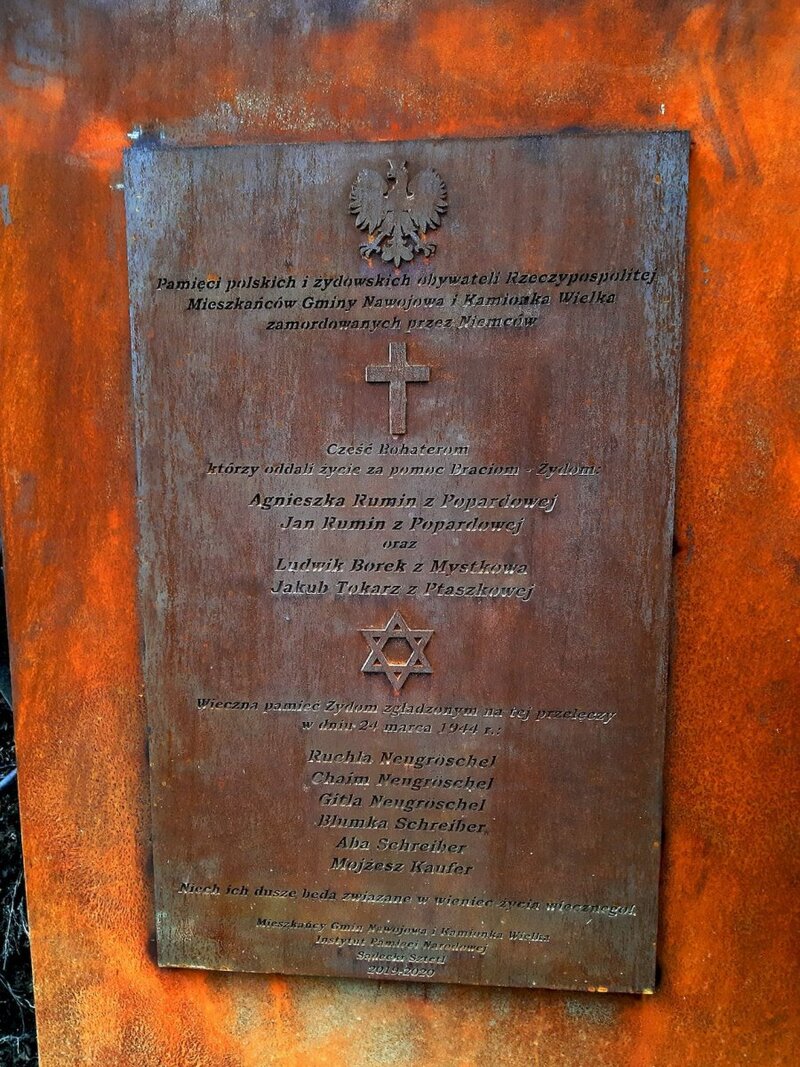 The composition, depicting the silhouettes of four Poles protecting six Jews, is located on the spot where the Rumin house used to stand during World War II. The founders of the monument, designed by Monika Kupiec, are the Nawojowa district authorities and the Institute of National Remembrance. The unveiling ceremony was scheduled for 22 March 2020, but had to be postponed due to the outbreak of the coronavirus epidemic

The story of the German Crime
Germans transported Jews from the smaller towns of Sądecczyzna to Nowy Sącz and to Grybów. The first stage of the logistic preparations for the mass crime was the gathering of the Jewish population into larger communities. Some Jews immediately began looking for shelter from deportation.
A group of eight relatives from the Kaufer, Neugröschl and Schreiber families lived in Zawada and in Ptaszkowa. First they came to Józef Borek, living in Mystków, who agreed to take them in. Jakub Tokarz, a resident of Ptaszkowa, assisted the families while they were moving to Mystków.
Firstly, all of the family members were sheltered by Józef Borek. Some time later, to relieve Borek, six people moved to Popardowa, to the Rumin family. Two remained with Borek. Everyone was aware of the fact that the Germans had announced that the death penalty would be imposed for any form of assistance offered to the Jewish population.
The Rumin family lived on the edge of the forest in Popardowa. Agnieszka Rumin lived with her seven children in a small wooden one-room house. At the beginning of the war, her husband Marcin Rumin had been deported to work in Germany.

Three Jewish men and three women came to the Rumin’s probably at the end of 1942 or early 1943. A hiding place was prepared for them in the attic of the house. The costs associated with the feeding and lodging of a group of six were a great challenge. One of the women in hiding embroidered tablecloths which were later sold. In the winter, Jews taught Agnieszka Rumin's small children to read and write.
This is how they managed to survive until the spring of 1944. In the absence of Agnieszka Rumin and her eldest son - Jan - armed Germans came to the house. First, they murdered all the Jews in hiding. On the second day they returned for Agnieszka and her eldest son. They didn't shoot the younger children. Agnieszka Rumin’s, then eleven-year-old daughter Kunegunda, recalled these events years later:
"[...] German soldiers came to the house. My mother was not at home, she went to Nawojowa, and my brother Jan was at work at the sawmill. The Germans searched our house, they immediately found and killed the Jews. I sat on the bed, hugging my two younger brothers, Józef and Ignacy. I was afraid. I thought they were going to kill us too.
I will not forget when they threw the body of the killed Mr. Kaufer from the attic, they killed him there because he did not want to come down. I felt sorry for Heniek, who had taught me how to write, and for pregnant Blimka. Heniek escaped and shots reached him near the forest. He almost managed to run away and hide.
The Germans asked me where my mother was. I lied saying that she had gone to my aunt’s [...]. Mum came back home with Janek. She wanted him to run away, but he wanted them to escape together. My mother said she couldn't go because they would kill the children and burn the house down, and if she stayed, they’d only kill her. As they were arguing the Germans returned. They chained them together.
I grabbed my mother by the skirt and did not want to let her go, I felt that I would not see her again. Then my mother said in a gentle voice that she would come back and that I should let go. I didn't listen. One of the soldiers shouted and aimed a gun at me, and then my mother pushed me hard, so that I fell to the floor, and the other soldier shouted and lowered the gun. It is impossible to describe what I felt when I watched them take them away. I still cry when I think about it. "
The mother, who was arrested, was sent by the Germans to Łabowa and then to Nowy Sącz. The woman was murdered on 24 March 1944. Jan Rumin was sent to prison in Tarnów. He was also murdered, and his name was placed on a public announcement of 30 March 1944, sentencing him to death for sheltering Jews.
A few days later, the Germans also appeared at the house of Józef Borek in Mystków. They found the two remaining Jews hiding there. Borek tried to hide, but eventually he fell into the hands of German services and was shot on 10 April 1944.
The Germans did not intend to spare  Jakub Tokarz from Ptaszkowa, who helped in the sheltering and transport of Jews. Shortly afterwards he was arrested, imprisoned and later murdered. Information about his death sentence was published in an announcement in Nowy Sącz on 3 May  1944.