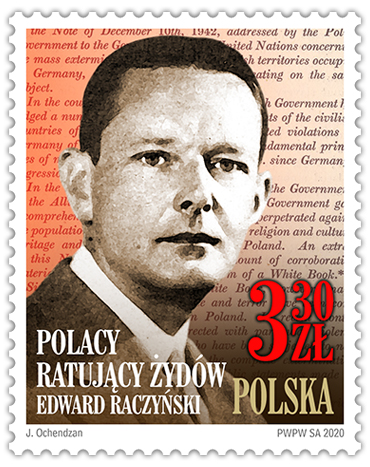 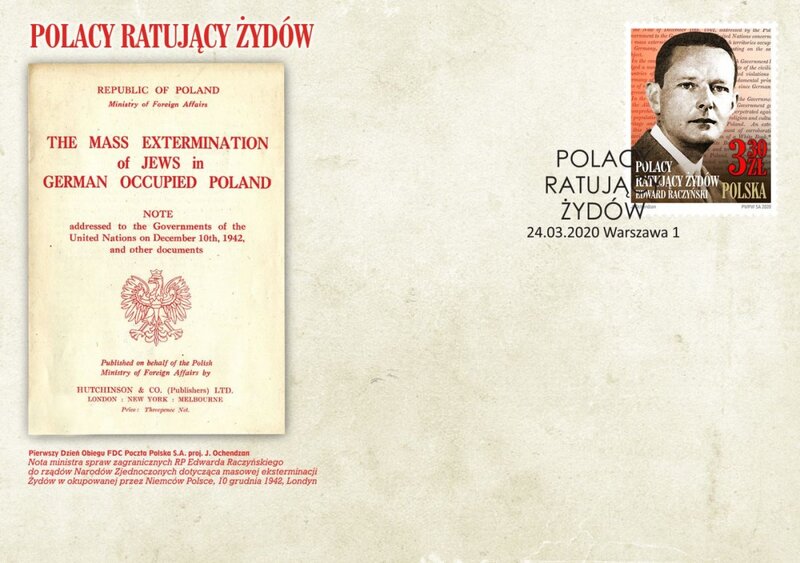 In connection with the  Polish National Day of Remembrance of Poles Rescuing Jews under German occupation, on 24 March 2020 the Polish Post will introduce a stamp, an FDC (First Day of Issue cover) envelope and a date stamp for the philatelic publications "Poles Saving Jews". The stamp was prepared in cooperation with the Institute of National Remembrance. This is a continuation of the series started in 2019 with a stamp dedicated to the Ulma family. This year’s issue is dedicated to Polish diplomats, with Edward Raczyński chosen as their representative.

In the folder describing the stamp Deputy President of the IPN wrote:

As a result of German and Soviet aggression against Poland in September 1939, the Polish government was in exile. It did not have an impact on the situation of the occupied country, but - through international actions – it attempted to alleviate the terror which was increasing towards the citizens. Already in April 1940, together with the British and French governments, it informed the world that German persecution of Poles was accompanied by cruel treatment of the Jewish population. On behalf of the Polish Government, extensive materials about the murders of Jews and Poles were published. Its representatives reported this in the press, on the radio and at protest rallies. They demanded determined action from the allies. These efforts were intensified by the Polish Government in 1942 when the Germans began the mass extermination of the Jewish population. The diplomatic note of Edward Raczyński – Minister of Foreign Affairs of the Government of the Republic of Poland in Exile dated 10 December 1942 was a breakthrough in alarming the world about the Holocaust. It prompted the allied states to sign a declaration regarding responsibility for the extermination of Jews. Another element of the Government's actions was the activity of Polish diplomats who helped issue false passports (such as those of neutral countries) for Jews who could still get out of the occupied territories. The efforts of the “Żegota” Council to Aid Jews, operating from December 1942 at the Government Delegation for Poland, were supported, and in May 1944 a Council for the Rescue of the Jewish Population in Poland was established in London. The actions undertaken by the Polish Government neither influenced the Germans to stop the bestiality, nor the allies, to militarily try to stop the genocide. However, they became real support for many thousands who were saved. The exact numbers are unknown, especially the number of people who – despite the help offered – could not be saved.

The stamp features the figure of Edward Raczyński, the President of the Republic of Poland in Exile and the Minister of Foreign Affairs. In the backround we can see a fragment of Raczyński’s Note regarding the extermination of the Jewish population in German- occupied Poland. The 3.30 złoty stamp, designed by Jarosław Ochendzan, will be issued in 120,000 copies. The FDC envelope presents the first page of "Raczyński’s Note addressed to the Governments of the United Nations " of 10 December 1942, reporting on the mass extermination of Jews in German-occupied Poland. The date stamp inclues the name of the issue, the circulation date and the issuing office, i.e. 24.03.2020 Warsaw 1.