An online press conference with the participation of the Deputy President of the Institute of National Remembrance Dr Mateusz Szpytma on the occasion of the Polish National Day of Remembrance of Poles Rescuing Jews under German occupation - March 23, 2020 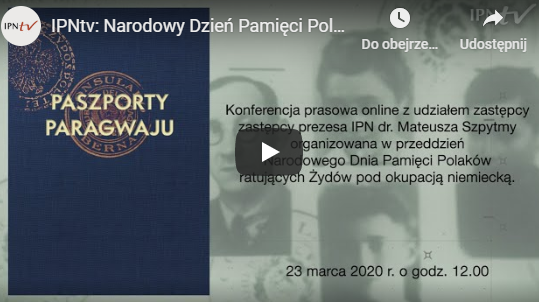 On 24 March 2020, we will celebrate the Polish National Day of Remembrance of Poles Rescuing Jews under German occupation for the third time. On this day, exactly 76 years ago, the Germans murdered the heroic Ulma family from Podkarpacie along with the Jews from the Goldman, Didner and Gruenfeld families they had been hiding.

This day was established - as stated in the act - "in tribute to Polish Citizens - heroes who, in the act of heroic courage, incredible bravery, compassion and human solidarity, faithful to the highest ethical values, orders of Christian mercy and the ethos of a sovereign Republic of Poland, rescued their Jewish neighbors from the Holocaust which was planned and implemented by the German occupiers. "

This day is an expression of reverence for all Poles who, showing mercy and compassion, helped Jews who were systematically murdered by their German tormentors. They motivated their actions in various ways - with love of one's neighbor, with the teaching of the Church, with a civic duty or with ordinary human decency. Regardless of the reason, each and every manifestation of help provided to hiding Jews was an expression of great heroism, especially considering the fact that on the territory of occupied Poland, the Germans imposed the death penalty for aiding Jews.

This aid, given in spite of the daily terror of occupation, was both individual and institutional - the example of the latter was the activity of the Council for Aid to Jews "Żegota", a secret organization affiliated with the Polish authorities.

Poles who saved Jews were, are and should serve as a role-model and an inspiration – They constitute not only the almost 7,000  heroes commemorated by the Yad Vashem Institute whose names and surnames are known, but also the thousands of Poles who have remained anonymous or did not receive this award. Today, after decades, it is impossible to determine their personal detais.

We invite you to watch the conference on the IPN’s social media (https://www.facebook.com/ipngovpl/) and on IPNtvPL on YouTube.