The Internet premiere of the IPN production "Passports to Paraguay" directed by Robert Kaczmarek, 5 p.m., 24 March 2020

On the occasion of the Polish National Day of Remembrance of Poles Rescuing Jews under German occupation the IPN has prepared an Internet screening of the IPN production ”Passports to Paraguay”. A year after its premiere, the film directed by Rober Kaczmarek, will be available to viewers online. 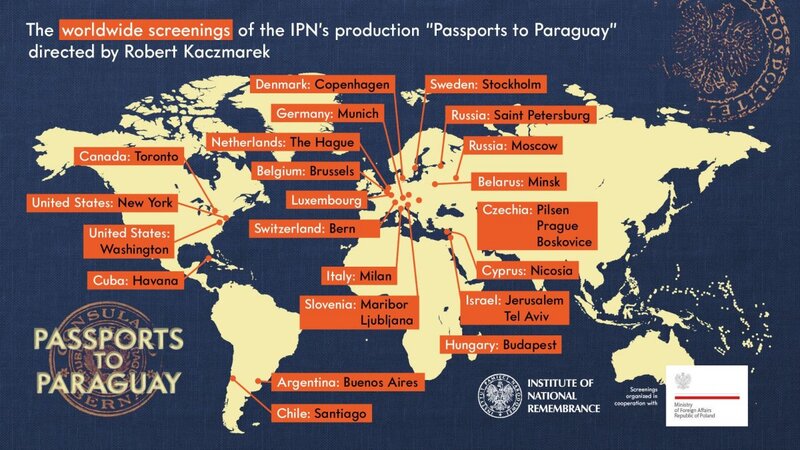 The film "Passports to Paraguay" directed by Robert Kaczmarek presents events concerning the participation of Polish diplomacy in rescuing Jews during World War II and forgotten Polish-Jewish cooperation against Nazi Germany. In 1942—1943, an informal group of Polish diplomats and activists of Jewish organizations worked together to obtain passports of South American countries for Jewish people imprisoned in ghettos by the Nazi German occupants of Poland and other European countries.

The film depicts a certain paradox. On the one hand, it tells the story of the criminal activities of the Polish State, of the criminal activities of Polish government officials and diplomats. It portrays the people who, as estimated, forged several thousand passports of another country. In any other circumstance this would be regarded as a shameful act, a disgrace to state institutions. However, it is not without reason that we are proud of these acts of forgery. In the world of German terror they served as a tool to save human lives. Every false passport could potentially protect one person or one family from the German state machine of the Holocaust. In total, as many as three thousand lives might have been saved. Until recently, historians generally believed that the operation conducted by Aleksander Ładoś saved mainly Jews from Poland. Ambassador Jakub Kumoch claims, however, that recent studies revealed that most of the saved were Jews from the Netherlands and Jews from Germany residing in the Netherlands. Indeed, they probably constitute the majority of those rescued by Ładoś, Rokicki and the other members of the Bernese group. Therefore, these diplomats can be referred to as true consuls of Europe. They saved people irrespectively of their citizenship, also those who were citizens of Germany, a hostile state. Some of the survivors who were children at the time of war have only now learnt that the secretly handed over document, which at the time constituted a passport to life and freedom, did not just appear from nowhere but was created and smuggled thanks to the efforts of the Polish state and its officials.

Today this is surely a reason to be proud. We cannot let the memory of the true face of that era die. We must not forget this time of contempt and crime so that we can always enjoy freedom and appreciate its true taste. We must also cherish the memory of the real heroes of that time so that they become role models for future generations." said Dr Mateusz Szpytma, Deputy President of the Institute of National Remembrance.

"Passports to Paraguay" is the IPN’s best film production. It has been numerously screened throughout Poland, shown on public television, and most importantly, in many countries around the world. The screenings were organized in cooperation with Polish diplomatic missions (Embassies, Consulates), Polish Cultural Institutes, associations and various Jewish cultural center. The wide reception of the film was possible thanks to the cooperation of the Institute of National Remembrance with the Polish Ministry of Foreign Affairs

The film has two language versions: Polish and English; subtitles have been prepared in several languages, including German, Italian, French, Russian, Hebrew, Slovenian and Hungarian. Work is also underway on subsequent language versions. Further screenings of the film are being organized or planned in cooperation with the Ministry of Foreign Affairs.

It is also worth mentioning that "Passports to Paraguay" won a prize in the main competition at the 11th Defiant, Indomitable, Doomed Film Festival in Gdynia in 2019, where it competed against 30 other documentary films.