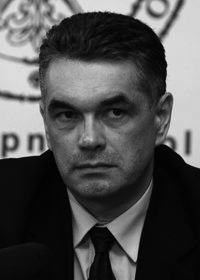 On April 10, 2010 on the way to commemoration ceremony of the 70th anniversary of the Katyń Massacre Lech Kaczyński, the President of the Republic of Poland, Maria Kaczyńska, the First Lady, members of the Polish delegation, including Professor Janusz Kurtyka, the President of the Institute of National Remembrance lost their lives in a plane crash. Eternal rest grant unto them, O Lord …

Janusz Kurtyka was the author of more than 140 publications in the field of the Polish mediaeval and early-modern history as well as the history of the anti-communist resistance movement in Poland after 1944. These include the books: ‘General Leopold “Niedźwiadek” Okulicki: 1898-1946’, ‘The Tęczyńskis. A Study of Poland’s Feudal Elite in the Middle Ages’, ‘The Tęczyński Latifundia. Estates and Owners: 14th-17th Centuries’, ‘The Reborn Kingdom. The Monarchy of Ladislaus the Short and Casimir the Great in the Light of Recent Research’. He was also the co-author of numerous other publications. Since 1994 he had been the chief editor of the ‘Freedom and Independence Historical Notebooks’, the co-author of the ‘The Historical and Geographical Dictionary of the Cracow Province in the Middle Ages’ and ‘The Polish Biographical Dictionary’. He chaired the Editorial Committee of the series ‘Conspiracy and Social Resistance in Poland: 1944-1956. A Biographical Dictionary’. He was a member of the editorial board of the Institute of National Remembrance’s scholarly journal ‘The Apparatus of Repression in the Polish People's Republic : 1944-1989’. Janusz Kurtyka held volunteer functions in such organisations as the Polish Historical Society, the Society of Friends of Science in Przemyśl and the Polish Heraldic Society.

He was a laureate of the Adam Heymowski Prize (1996), the second prize in the Klemens Szaniawski Competition (1998), the Joachim Lelewel Prize (2000) and the Jerzy Łojek Prize (2001). In 2009 President Lech Kaczyński awarded him with the Commander's Cross with Star of the Order of Merit of the Republic of Poland.

He was married, with two sons.