The following text is introductory to the subject of the functioning of German camps located on the territory of Poland within its current borders in 1939-1945. 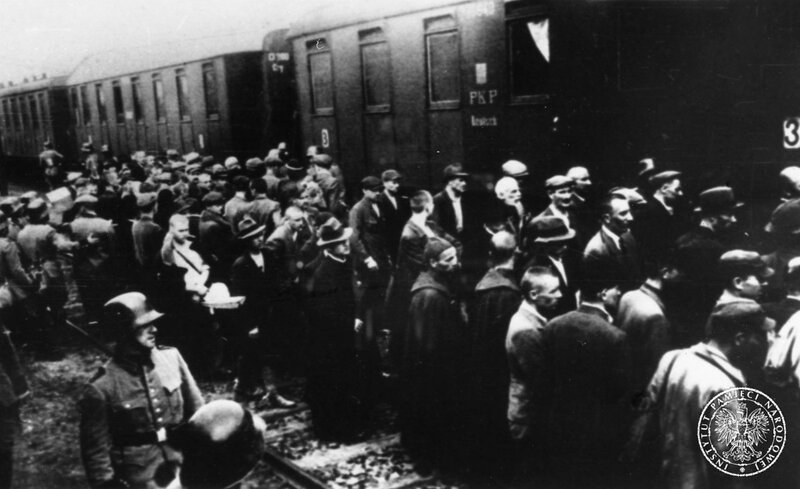 During German occupation, Polish citizens were subjected to the extermination policy of the German Third Reich, which aimed at the biological destruction of the Nation and its cultural and material destruction. The criminal actions undertaken against Polish citizens were initiated in September 1939 by the Wehrmacht, SS, Einsatzgruppen, Gestapo and Volksdeutscher Selbstschutz. From that time, practically until the very end of the war in 1945, genocide was taking place in German concentration camps, extermination camps, as well as other centres of forced isolation, i.e. arrests and prisons, forced labour camps, prisoner-of-war and internment camps, resettlement and germanization camps, and ghettos intended for the population of Jewish nationality. Camps, sub-camps, ghettos, work commandos of various types and purposes established in occupied Poland served  the physical liquidation of the prisoners and the use of prisoners' work for the economic needs of the Third Reich. Polish citizens were also imprisoned in various camps located within the Reich territory and in other occupied European countries.

The model of a concentration camp developed in theThird Reich in1933 -1937 , specifying its internal organization, SS crew structures and the treatment and punishment of prisoners, was systematically implemented in the camps operating in the occupied territory of Poland.

Stutthof went down in history as a German Nazi concentration camp founded at the initiative of Gauleiter Albert Forster. The first transport of about 135-150 Polish residents of the Free City of Gdansk, arrested on 1 September  1939, was delivered to the Stutthof camp on 2 September 1939. Initially, this camp was called a transit camp for civilian prisoners of Stutthof (Zivilgefangenenlager Stutthof) in the German nomenclature. From September 1939, more such camps were set up in Poland, but only some of them were expanded and existed until the end of the German occupation. Although the Stutthof camp met the requirements of German concentration camps from the beginning, it was only Heinrich Himmler, after a personal visit to the camp on 23 November 1941, who agreed to grant such status on 7 January  1942.  The evacuation of KL Stutthof was scheduled for 25 January  1945. It is estimated that approximately 65,000 prisoners were killed as a result of the criminal activities in KL Stutthof, both in the main camp and its sub-camps and labour commandos and on all evacuation routes by land and sea in 1945.

The first concentration camp created by Germany on the territory of occupied  Poland, was established in May 1940 in the suburbs of Oświęcim. The immediate reason for establishing KL Auschwitz was the constantly growing number of Poles arrested and the overcrowding of the local prisons. The first transport of Poles, mainly suspected of participating in the underground, arrived at KL Auschwitz on 14 June  1940 from the prison in Tarnów. From 1942, this camp was one of the main "Endlösung der Judenfrage" centres ("the final solution of the Jewish question"), where Jews brought from all over Europe were murdered by means of Cyclone B. In 1944, at the peak of its operation, the camp consisted of three parts: Auschwitz I, created in 1940, Auschwitz II-Birkenau and Auschwitz III. In 1942-1944 KL Auschwitz had over 40 sub-camps where prisoners were used for forced labour for German industrial plants and farms. The Auschwitz camp became a symbol of terror, genocide and the Shoah for the world. It is estimated that nearly 1.1 million prisoners died in this camp, including: 1 million Jews, from 70 to 75 thousand Poles, 21 thousand Roma and Sinti, 15 thousand Soviet prisoners of war and 10-15 thousand prisoners of other nationalities.

In July 1941, by the decision of Heinrich Himmler, another KL Lublin concentration camp was established, colloquially called Majdanek, due to its location. Majdanek operated from October 1941 to July 1944. The camp was intended for 25-50 thousand prisoners who were to constitute a free labour force for the implementation of plans to expand the Third Reich. It was constructed from autumn 1941. The camp was initially called Kriegsgefangenenlager der Waffen SS Lublin (prisoner-of-war camp), and in February 1943 it was renamed Konzentrationslager Lublin (concentration camp). This camp also constituted an important link in the implementation of the "final solution of the Jewish issue". Majdanek had several sub-camps: in Lublin at the former airport of Plage and Laskiewicz plants, and at Lipowa, as well as in Budzyń, Radom, Bliżyn and Warsaw. The prisoners came from almost 30 countries. Citizens of Poland, the USSR and Czechoslovakia dominated. According to the latest research from  among probably 150 thousand prisoners who went through Majdanek, nearly 80 thousand lost their lives. The largest number of the dead and murdered included Jews (about 60,000 people), followed by Poles, Belarusians, Ukrainians and Russians. The tragic history of the Lublin concentration camp came to an end on 22 July  1944, when the camp was liquidated.

The Gross-Rosen camp was established in August 1940 as a branch of KL Sachsenhausen. The inmates were intended to work in a local granite quarry. The first transport arrived there on 2 August  1940. On 1 May  1941, Arbeitslager Gross-Rosen obtained the status of an independent concentration camp.  It was considered one of the heaviest concentration camps due to the working conditions of prisoners. The largest extension of the camp took place in 1944.  Nearly 100 branches were then established next to the main camp, located primarily in Lower Silesia, the Sudetes and Lubusz Land. It is estimated that about 125,000 prisoners passed through the mother camp and its branches. Jews from various European countries, Poles and citizens of the USSR belonged to the most numerous national groups. According to the latest findings, approximately 40,000 people died in KL Gross-Rosen.

In mid-1942, the Germans constructed the Treblinka (SS-Sonderkommando Treblinka) extermination camp, near the existing Treblinka I labour camp. This camp was established as part of "Operation Reinhard" which aimed at murdering the Jewish population. The first transport arrived at the camp on 23 July 1942 and consisted of Jews deported from the Warsaw Ghetto. Subsequent transports were composed of the Jewish population brought from the occupied areas of Poland, as well as Czechoslovakia, Greece, Yugoslavia, France and the USSR. Prisoners were killed using flue gases in a gas chamber built on the camp grounds. More than 800,000 people were murdered in this camp. Their corpses were burned on specially constructed grates to blur the traces. After the outbreak of armed prisoners' uprising on 2 August 1943, the camp was systematically liquidated until November 1943, when the camp infrastructure was completely demolished and the area of the camp was plowed.

In the summer of 1943, by the order of Heinrich Himmler, Konzentrationslager Warschau (KL Warschau) was founded on the ruins of the liquidated Warsaw Ghetto. This camp functioned as a branch of KL Majdanek until 5 August 1944, when it was taken over by soldiers of the "Zośka" Home Army battalion. According to estimates, more than 7,000 people were held in this camp, mostly Jewish nationals from various European countries, i.e. Poland, Greece and Hungary. Only about 300 prisoners survived until the liberation of the camp.

The German Nazi Plaszow labor and concentration camp  was one of the three concentration camps founded by the Third Reich on the territory of the General Government. It was created by the Germans in October 1942 in Krakow in the area of two non-existent Jewish cemeteries in the Wola Duchacka district. Initially, it functioned as a labor camp (Zwangsarbeitslager) for the purpose of several thousand Jewish prisoners transferred from the Krakow ghetto liquidated in March 1943. In January 1944, the Plaszow labor camp was transformed into a concentration camp (Konzentrationslager Plaszow bei Krakau - KL Plaszow), in which mainly people of Jewish origin were imprisoned. Based on scientific research, it is estimated that about 30,000 were imprisoned there throughout the entire period of the camp's operation, and about 5,000 were murdered. In August 1944, the liquidation of KL Plaszow began, the "death march" of the last group of about 600 prisoners began on 14 January 1945.

Several million people lost their lives in the camps created in occupied Poland, due to direct and indirect extermination. Prisoners were subjected to various forms of direct extermination, including: gassing, shooting and other forms of murder, execution under judgments issued by police ad hoc courts (Polizeistandgericht), beating, biting to death by camp dogs and harassment. The forms of indirect extermination in connection with which prisoners died in the camp included: poor living and sanitary conditions, hard work, inadequate clothing and meals, diseases and epidemics, pseudomedical experiments and accidents at work. The extermination measures aimed at implementing the program of extermination of Polish citizens in German Nazi concentration camps were recognized by the International Military Tribunal in Nuremberg in 1946 as crimes against peace, war crimes and crimes against humanity.

Camps, sub-camps, ghettos, work commandos of various types and purposes established in occupied Poland served for the physical liquidation of the prisoners and the use of prisoners' work for the economic needs of the Third Reich.

Majdanek had several sub-camps: in Lublin at the former airport of Plage and Laskiewicz plants, and at Lipowa, as well as in Budzyń, Radom, Bliżyn and Warsaw. The prisoners came from almost 30 countries. Citizens of Poland, the USSR and Czechoslovakia dominated.

Arbeitslager Gross-Rosen obtained the status of an independent concentration camp. Due to the working conditions of prisoners, it was considered one of the heaviest concentration camps. The largest extension of the camp took place in 1944. Then, next to the main camp, nearly 100 branches were established, located primarily in Lower Silesia, the Sudetes and Lubusz Land.

Several million people lost their lives in the camps created in occupied Poland due to direct and indirect extermination. Prisoners were subjected to various forms of direct extermination, including: gassing, shooting and other forms of murder, execution under judgments issued by police ad hoc courts (Polizeistandgericht), beating, biting to death by camp dogs and harassment.