The 75th anniversary of the outbreak of the Warsaw Uprising.

By order of the Commander of the Home Army, General Tadeusz Komorowski "Bór", the Uprising in Warsaw began on 1 August 1944. The task of the Home Army (AK) was to liberate the capital and seize it for a few days until the Red Army enters. This would enable the Delegation of the Government of the Republic of Poland to the Country, representing the legal Polish Government In Exile, to cast civil authority over Warsaw, thus awaiting the Soviets as  free and independent hosts of their country. It was the last chance to save the independence of the Polish State, secretly betrayed by our Western allies - Great Britain and the United States. 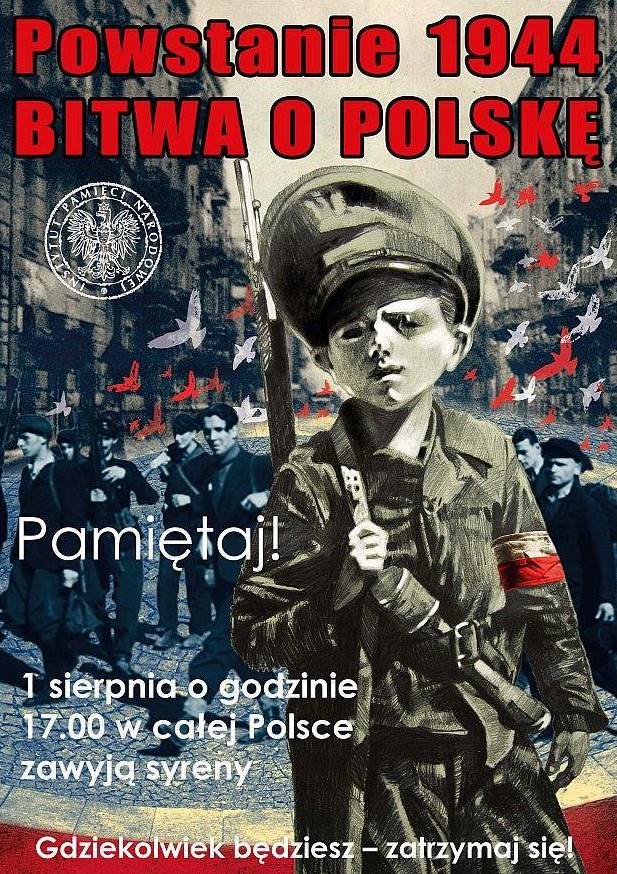 The disproportion of forces was extremely unfavorable for the Polish side. Among 50,000 soldiers of the Home Army, the National Armed Forces and the People's Army, only one out of 25 joining the fight was armed. Meanwhile, the Germans engaged the regular army, the SS, the Police, the Gendarmerie and auxiliary troops, supported by heavy artillery and aviation. Nevertheless, the insurgents achieved a number of significant successes. They regained control over considerable areas of Śródmieście, Żoliborz, Mokotów, Wola and Ochota and took hold of vast amounts of German equipment and weapons, including armoured vehicles.

The insurgents also liberated the Konzentrazionslager Warschau, German concentration camp where Jews from various European countries were imprisoned. The people of Warsaw often referred to the camp as "Gęsiówka".

The condition of the final success of the Uprising was the Red Army entering the city. Meanwhile, Joseph Stalin ordered his troops to stop on the Vistula river and refrain from any actions against the Germans. The latter, therefore, pacified the city without hindrance, committing numerous mass crimes, both on the insurgents and on the civilian population.

Drops of supplies for the insurgents, carried out by the air forces of the Western Allies (including Polish airmen) were just a fraction of what was actually needed and could not change the course of events. In the absence of food and water supplies, on 2 October 1944, after 63 days of the heroic  struggle, the Home Army's command was forced to sign the capitulation order of the remaining Polish forces. Approximately 17,000 insurgents were taken prisoner and about 15,000 were killed.

Losses among civilians are estimated at 150,000 to 200,000. people. Over the following months, the Germans methodically robbed, burned and blew up other parts of our capital. They ultimately withdrew from the city on 17 January 1945, allowing the troops of the Polish Army, subordinated to the communists, to enter Warsaw.

In order to commemorate the 75th anniversary of the Warsaw Uprising, the Institute of National Remembrance has prepared numerous events throughout Poland such as exhibitions, commemorative ceremonies,film screenings, games, educational workshops, concerts and many more.

On 31 July 2019  a ceremonial Holy Mass, a Roll Call for the Fallen and a concert "Warsaw is sad without you" took place on Krasinski Square in Warsaw. In state ceremonies, the Institute of National Remembrance was represented by the Deputy President of the IPN Dr Mateusz Szpytma and Prof. Krzysztof Szwagrzyk.

1 August 2019 – at 68 Filtrowa Street, the exact location where 75 years ago Col. Antoni Chruściel, ″Monter”, signed the order to start the Warsaw Uprising, a wreath on behalf of the Institute of National Remembrance was laid by Adam Siwek, the Director of the Office for Commemorating the Struggle and Martyrdom.