The 78th anniversary of the Volhynia Massacre

The National Day of Remembrance is intended to commemorate the victims of the Volhynia Massacre and other murders carried out on citizens of the Second Polish Republic by Ukrainian nationalists during World War II. 11 July marks the anniversary of the so-called bloody Sunday of 1943, which was the culmination of the mass extermination of the Polish civilian population in Volhynia by the OUN, UPA, supported by the local Ukrainian population.

On Sunday 11 July 1943, the UPA detachments carried out a coordinated attack on 99 Polish villages, mainly in the Kowel, Włodzimierz Wołyński and Horochów counties. This was the climax of the murders carried out from February 1943 to the spring of 1945. Researchers estimate that on that day alone approximately 8,000 Poles - mainly women, children and the elderly could have been killed. The perpetrators used bullets, axes, pitchforks, knives, and other weapons. Many Poles were killed in churches during mass and services.

The crime, qualified by the Institute of National Remembrance as genocide, was carried out by Ukrainian nationalists from the OUN-B and the UPA on the Polish population of Volhynia, Eastern Galicia, as well as parts of the Lublin region, Podkarpacie and Polesie. It is estimated that as a result, in the years 1943-1945 about 100,000 Poles were murdered. 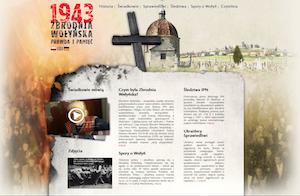