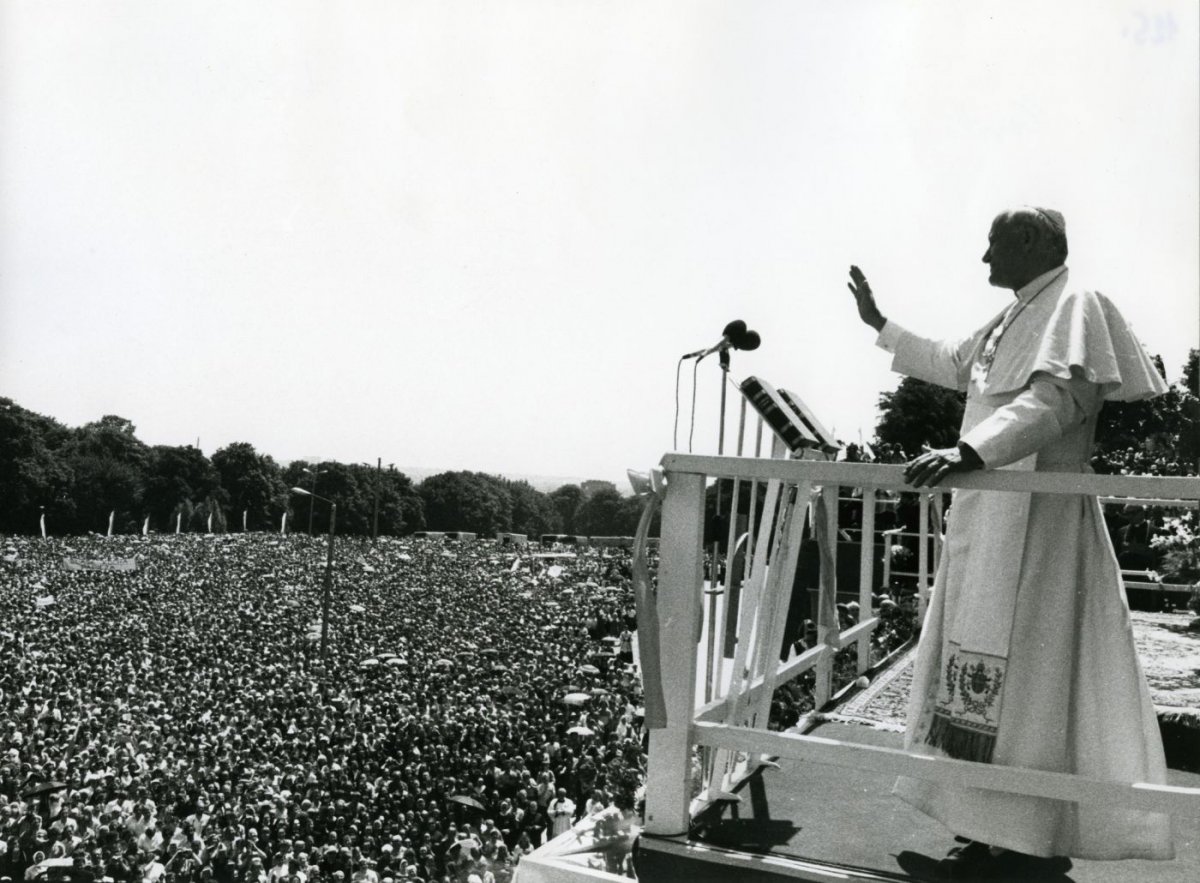 The first of John Paul II’s three pilgrimages to his homeland began on 2 June 1979. The Pope visited Warsaw, Gniezno, Częstochowa, Cracow, Kalwaria Zebrzydowska, Wadowice, Oświecim, Nowy Targ and again Cracow. The official motto of the apostolic journey was taken from the opening words of a hymn in honor of St. Stanislaus of Szczepanów – ‘Gaude Mater Polonia’ (Rejoice, Mother Poland). The communist authorities were displeased with the fact that the Pope was to visit Poland, fearing that it would awaken the Polish yearning for independence. It was during this pilgrimage that the Pope uttered the famous words: “And I cry out from the depths of this millennium – let your Spirit descend and renew the face of the earth. The face of this land."

On the occasion of the upcoming anniversary of the first pilgrimage of Pope John Paul II to Poland the Institute of National Remembrance has prepared several events, including: 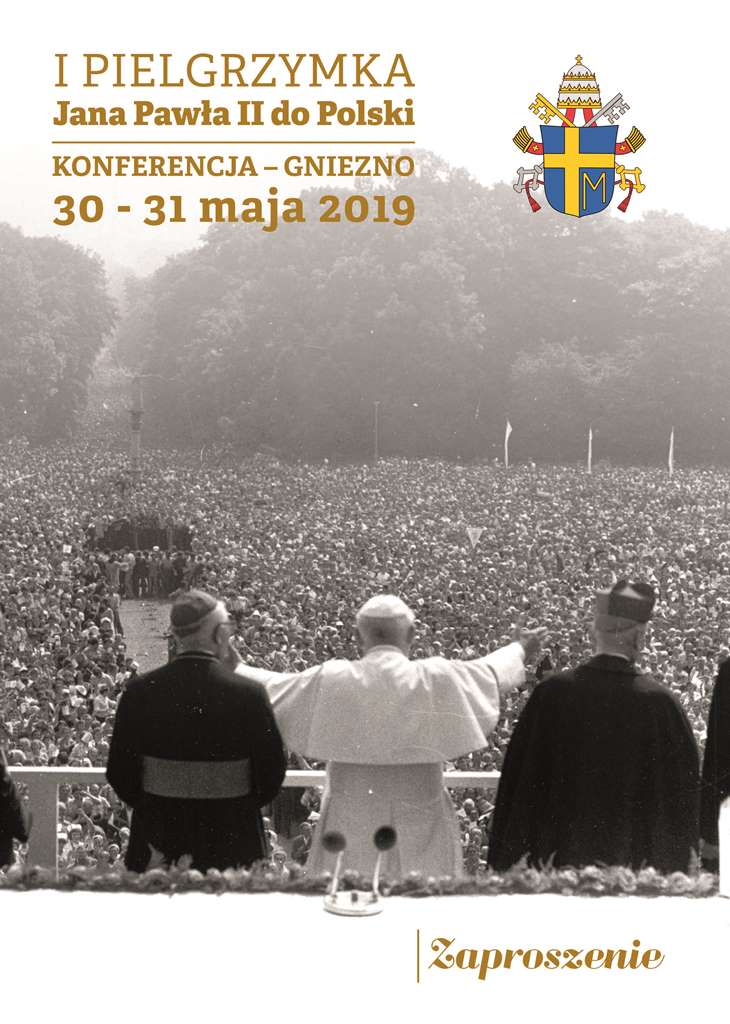 A two-day conference "1st Pilgrimage of John Paul II to Poland" in  Gniezno, 30-31 May 2019 with the participation of the President of the IPN, Dr Jarosław Szarek. The conference was organized by the Roman Catholic Archdiocese of Gniezno , the Branch Office of the Institute of National Remembrance in Kraków and in Poznań and the Faculty of Theology of the Adam Mickiewicz University in Poznań. During the opening speeches of the conference devoted to John Paul II’s first pilgrimage to Poland in June 1979, Dr Jarosław Szarek  reminded the Pope’s memorable words of Europe’s two lungs, the East and the West, words which reverberated for years. He also mentioned that “John Paul II addressed the issues of our identity and heritage, spoke about our tradition, culture and history. It is here in Gniezno, that we heard his words about the spiritual unity of  Europe, words which influenced the fall of the Iron Curtain.”

The exhibition, prepared by the Katowice Branch Office of the Institute of National Remembrance presents almost 40 photographs from the collections of the Cardinal Stefan Wyszynski Primate's Institute and the Archive of the IPN - most of which have never been published before. The result of an international press query is a collection of titles from the German, Italian, Dutch, French and American press which will be shown as part of the exhibition. An important addition to the narrative are fragments of statements made by representatives of the communist authorities about the pilgrimage - during and after the preparations.

The exhibition can be viewed until 20 June 2019.The authors of the exhibition are Dr Anna Badura, Ryszard Mozgol, Dr Andrzej Sznajder. 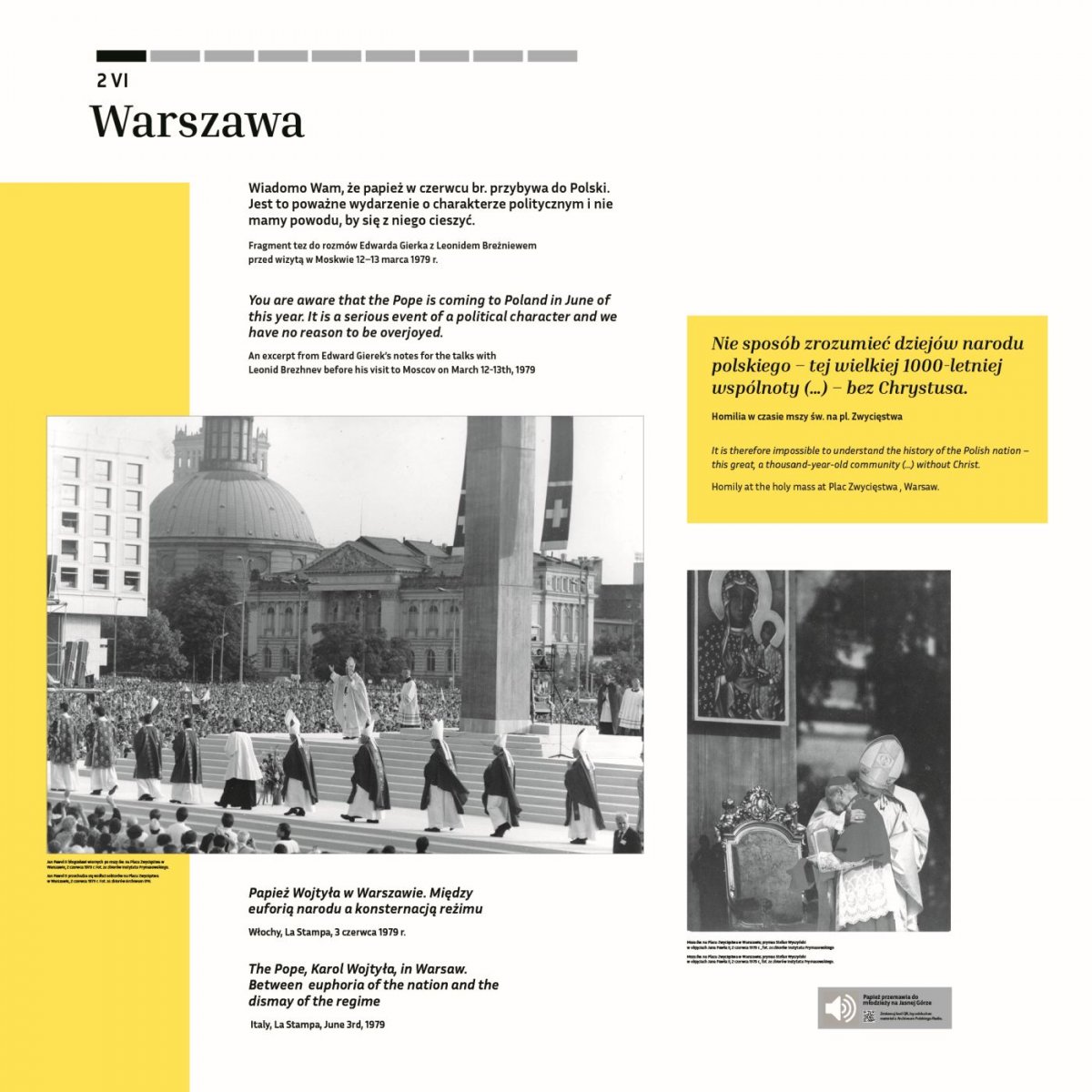 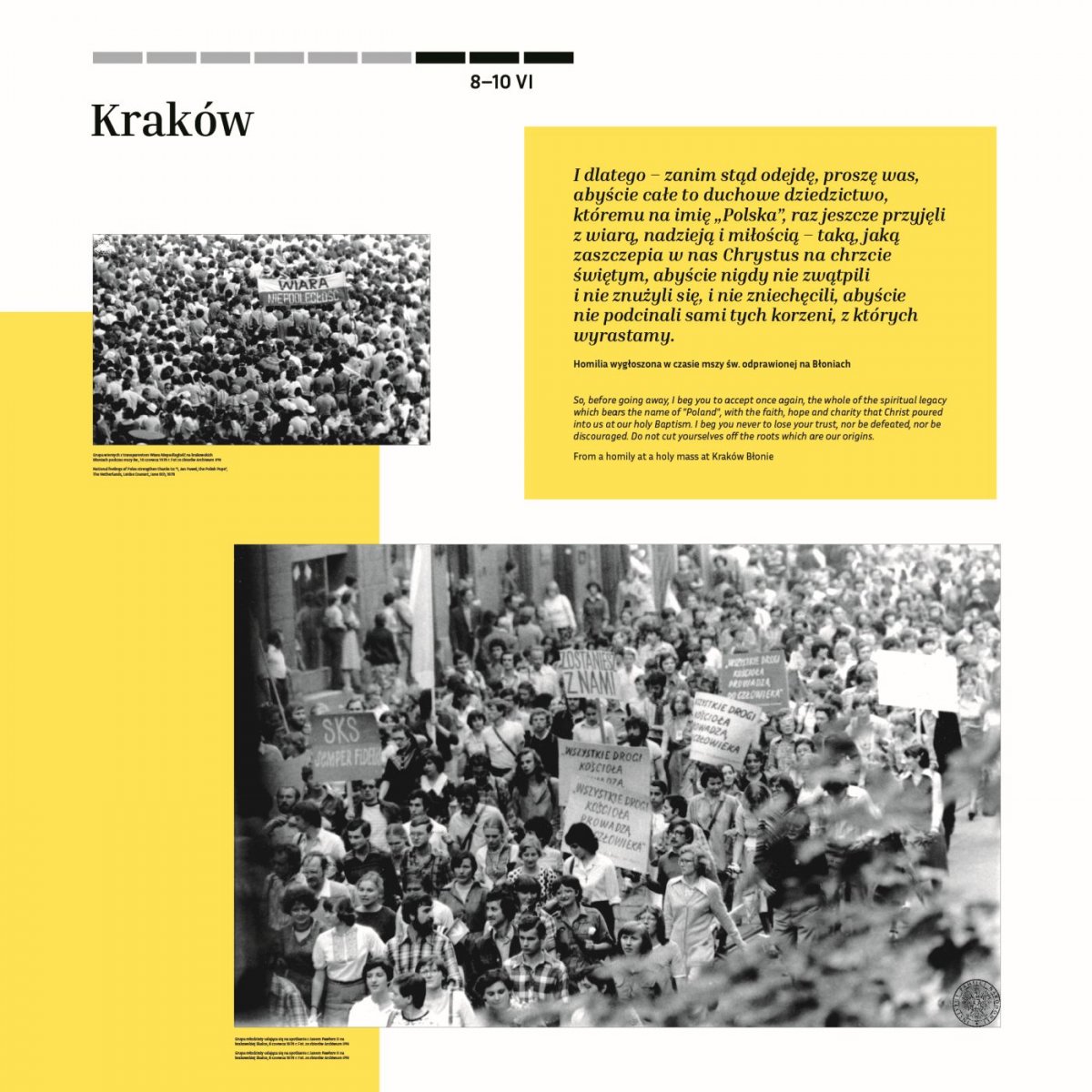 The launching of a new IPN portal: pierwszapielgrzymka.ipn.gov.pl devoted to the first pilgrimage of Pope John Paul II to Poland.

On the website we present copies of documents, photographs, graphics, maps and other interesting souvenirs from the apostolic journey in 1979.

Most of the materials posted on the website were created or gathered by the Security Services of the Polish People’s Republic. They are complemented by documents provided by private donors and Polish community organizations abroad.

The introduction to the portal has been prepared by Prof. Jan Żaryn. The materials in the "Documents" section were divided according to the stages of the pilgrimage (chronologically from Warsaw to Kraków), according to topics (preparation, Security Services interviews, files, Army documents, polish community press abroad, analyzes and evaluations) and by the specific IPN branches and delegations providing materials. The introductory texts to the individual sets of documents were prepared by the employees of the scientific and archival departments of the IPN from Warsaw, Kraków, Katowice and Poznań.

The "Education" section includes digital versions of IPN publications, films and educational materials, information about conferences, exhibitions and other initiatives undertaken by the Institute of National Remembrance in connection with the commemoration of the Polish Pope.