On the occasion of the Polish National Day of Remembrance of Poles Rescuing Jews under German occupation the IPN has undertaken numerous activities. We invite you for the screenings of "Passports to Paraguay" in numerous Polish towns and villages, and for the exhibition "It is Deeds that Make the Man. Poles helping Jews during the Holocaust on the Eastern Borderlands of the Second Republic of Poland "and the ceremony of the unveiling of the plaque in homage to Mother Matilda Getter. 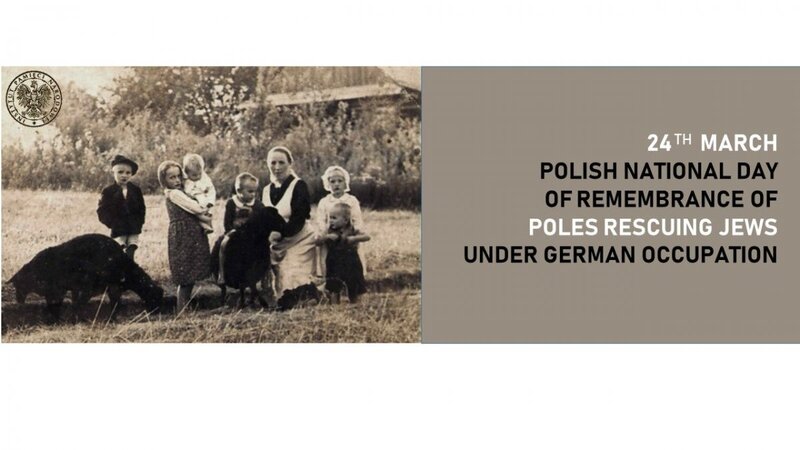 German aggression in September 1939 initiated  the most tragic period in the history of Poland. In occupied territories the Germans introduced unheard-of terror, aimed primarily at Polish population and the large Jewish minority. In 1941, the leaders of the German Reich decided to physically annihilate the entire Jewish nation, and then proceeded to the implementation of this task. As a result of the German invader's terror, a total of 5.5-5.8 million European Jews were killed by the end of the war, half of whom had Polish citizenship.

Despite the anti-Jewish propaganda spread by the occupant, the Germans saw that a number of Jews can still count on the support of Poles. In order to prevent this, on 15 October 1941, they issued a decree on the death penalty for any form of aid offered to Jews, and then extended the punishment to those who knew about the fact of granting help but did not report it to the Germans. It is estimated that even hundreds of thousands of Poles could have provided immediate or longer help to their Jewish neighbours.

Organized help was provided under the auspices of the Polish Government-in-Exile, which alerted the world about the Holocaust and through a large number of its officials and diplomats helped in practice, and the Polish Underground State, under which the “Żegota” Council f or Aid To Jews, a specialized unit non-existent in other occupied countries operated. A number of religious congregations and priests, including bishops, were also involved in the help. However, the greatest support was given by individual people. Their courage was all the greater because they were often afraid not only of the Germans, but also of denunciators reporting to the Germans on everyone who acted against the occupational "law".

Just as researchers have not determined the exact number of Poles saving Jews, so we do not know all the data about Jews saved by Poles - there were probably tens of thousands of them. Approximately a thousand Poles died from German hands for helping Jews.

The internationall recognized symbol of Polish martyrdom for helping Jews is the Ulma family. At the end of 1942,Józef and Wiktoria, who lived with their six children Stasia, Basia, Władzia, Franek, Antek and Marysia in Markowa in Podkarpacie, welcomed to their home eight Jews from the Goldman, Grünfeld and Didner families. Everyone, including the seventh child in Wiktoria's womb, were murdered by the German police on 24 March 1944. Józef and Wiktoria were awarded posthumously with the medal of the Righteous Among the Nations and the Commander's Cross of the Order of Polonia Restituta. The beatification process of the entire family is underway in the Catholic Church.