On the occasion of the 100th anniversary of Poland's regaining independence, on 14-18 November 2018 the Apulian Italian-Polish Association is organising the second edition of the Polish-Italian Culture Week in Bari. The event is held under the patronage of the Speaker of the Polish Senate Stanisław Karczewski and the President of the Institute of National Remembrance, Dr Jarosław Szarek.

During the opening ceremony Katarzyna Ratajczak-Sowa of the Office of the President of the Institute of National Remembrance read the letter of the President of the Institute to the organizers and participants of the event. In his letter, Dr Jaroslaw Szarek emphasized the common experiences of Poles and Italians in recent centuries, and touched upon the 100th anniversary of regaining independence by Poland celebrated this year.

It is worth highlighting that Italy is a nation with which Poland shares the same ideas of ​​liberation struggles. You fought for the unification of the entire country under one banner. We fought for the independence of the lost Homeland, torn between three invaders. And although our history is different, our nations share the same gene. It is the genre of freedom – a relentless pursuit of freedom...  There’s a reason why the soldiers of the Polish Legions, formed and fighting in Italy in 1797-1807, on the shoulder straps of their uniforms wore the inscription: Free people are brothers. It was written in Italian.

The inauguration launching a series of events promoting Polish culture in Italy was attended by the representatives of the upper house of the Polish parliament including Senator Grażyna Sztark, Grzegorz Kozuba, the Deputy Consul of the Embassy of the Republic of Poland in Rome, and Dr Mirosław Obstarczyk from the Auschwitz-Birkenau State Museum in Oświęcim. Professor Antonio Mercurio, the President of the Apulian Italian-Polish Association, greeted guests from Poland extending special thanks to the Institute of National Remembrance for its support of the initiative and providing educational materials for the participants of numerous events planned as part of the Polish-Italian Culture Week.

A meeting with students of the "Massari Galieli" high school was the highlight of the second day of the Polish-Italian Culture Week in Bari. The students welcomed the guests singing Polish and Italian anthems. Professor Antonio Merucrio, history teacher at this school and at the same time the President of the Apulian Italian-Polish Association, opened the meeting underlining the special significance of this year for Poland, referring to the centenary of Polish independence. Then, the IPN’s employees talked about Polish roads to independence and the history of the Ulma family, murdered in 1944 in the village of Markowa. They died for giving help to their Jewish neighbors. The tragic history of the Ulma’s is the theme of the exhibition "The Good Samaritans from Markowa", prepared by the Institute of National Remembrance. The exhibit attracted enormous interest of young people, teachers and the guests. Also, the students received IPN’s occasional badges prepared for the 100th anniversary of Poland regaining its independence. 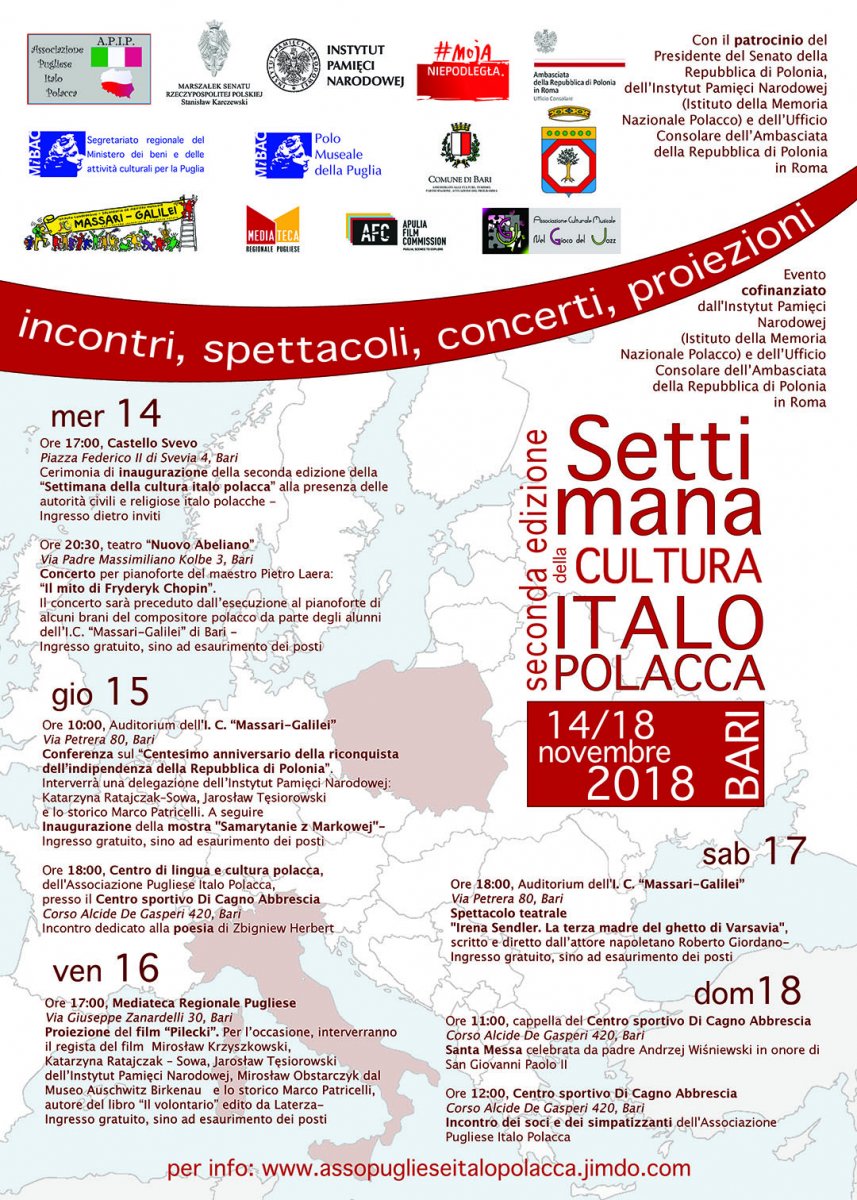