”The Pope from Behind the Iron Curtain” – Cracow-Budapest

An international scientific conference on the 40th anniversary of the election of Cardinal Karol Wojtyła as the head of the Church. 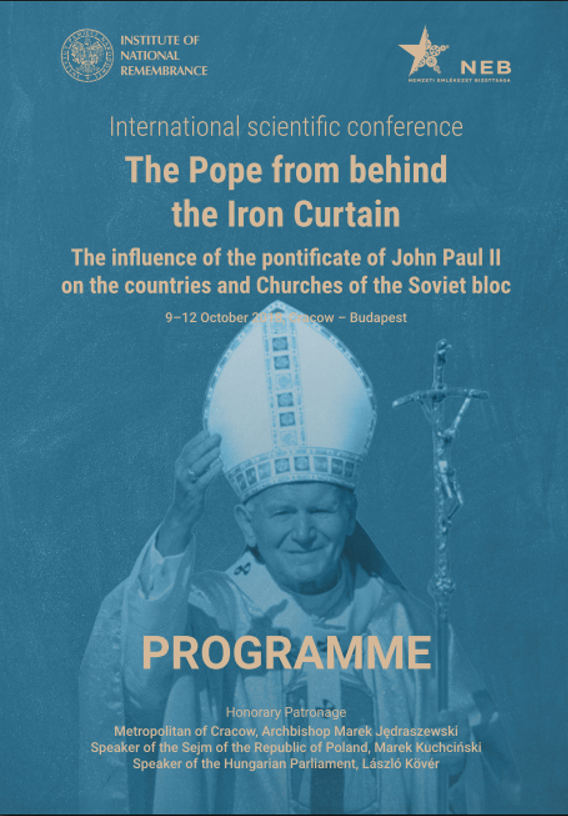 - This is the place where the iron curtain began to open- the President of the Institute of National Remembrance, Dr Jaroslaw Szarek addressed the Hungarians, referring to 1989, when the Hungarian-Austrian border was opened. The international scientific conference entitled "The Pope from behind the Iron Curtain. The influence of the pontificate of John Paul II on the countries and Churches of the Soviet bloc” ended in the impressive hall of the Hungarian Parliament on 12 October 2018. The proceedings organized on the occasion of the 40th anniversary of the election of cardinal Karol Wojtyła, as the head of the Church, began on 9 October in Cracow and continued in Budapest.

The conference was a joint initiative of the Institute of National Remembrance and the Hungarian National Remembrance Committee (Nemzeti Emlékezet Bizottság). During the opening ceremony of the last day of the meeting, the chairman of the Hungarian National Assembly, Dr László Kövér, reminded the participants of the conference that throughout his pontificate John Paul II was often the object of media attacks in the world. - It was him who, while talking about the culture of death, defended life - said the Chairman of the Hungarian Parliament.

The President of NEB, Dr hab. Réka Földváryné Kiss asked a number of questions in her speech. - Who would have thought, what the consequences of the words "Do not be afraid" would be? What is the role of the Pope in history? - the head of the Hungarian National Remembrance Committee wondered. Dr Szarek, in turn, emphasized the strength and timeliness of the teachings of John Paul II. According to the President of the Institute of National Remembrance, they are also needed today and should be passed on to next generations.

The deliberations of the last day of the conference were centered around the pontificate of John Paul II and its significance. The papers presented by the speakers were devoted to reactions of the Hungarian Parliament to the news of the election of the Pope, and the  cooperation of communist intelligence services and parties during the assassination attempt of John Paul II.

During the visit to Budapest, the IPN delegation laid flowers under a plaque commemorating the Hungarian uprising of 1956.

The Cracow part of the international scientific conference "The Pope from behind the Iron Curtain. The influence of the pontificate of John Paul II on the State and Churches of the Soviet bloc”, organized by the Institute of National Remembrance and the Hungarian National Remembrance Committee (Nemzeti Emlékezet Bizottság) on ​​the occasion of the 40th anniversary of the election of Cardinal Karol Wojtyła as the head of the Church, has come to a close.

For two days, the Auditorium Maximum of the Jagiellonian University was the place where experts from many countries debated. The main topic of the lectures was the situation of Christian churches in the communist dictatorships of the second half of the twentieth century, with particular emphasis on the activities of John Paul II.

On 10 October 2018, during the second day of the debates and backstage discussions, Dr Andrzej Grajewski, a historian, publicist, book author, deputy editor-in-chief of the weekly "Gość Niedzielny”, a former member of the IPN Council, devoted the majority of his speech to polemics with the previous speaker, Dr hab. Momchil Metodiev from Bulgaria regarding the so-called Bulgarian trail in the attack on John Paul II on 13 May 1981.

- I'm not saying that the Bulgarians formed the plan of the murder of the Pope. We also do not have any documents confirming that there was an order coming from Moscow for the Bulgarians. However, it is known that there was an operation of the services of both countries, that in April there was a meeting of Soviet and Bulgarian intelligence. We do not have any documents, but what do the services do after such incidents as a failed assassination attempt? They destroy all of the documents - argued Dr Grajewski, author of numerous publications on the subject of the assassination attempt, among others the book „Agca nie był sam. Wokół udziału komunistycznych służb specjalnych w zamachu na Jana Pawła II”" [Agca was not alone. On the topic of the participation of the communist secret services in the attack on John Paul II"], written in cooperation with prosecutor Michał Skwara from the Katowice Branch Office of the Chief Commission for the Prosecution of Crimes against the Polish Nation, who conducted the IPN investigation on the assassination of John Paul II.

The two days of meetings in Cracow were summed up by prof. Jan Żaryn (Cardinal Stefan Wyszyński University in Warsaw), who gave a lecture entitled "John Paul II - the significance of the pontificate for Poland and the world". Today, the participants of the conference are travelling to Budapest, where the last discussion panels and closing of the debates at the Hungarian Parliament are scheduled for October 12.

9 October 2018 marked the opening of an international scientific conference entitled "The Pope from behind the Iron Curtain. The influence of the pontificate of John Paul II on the State and Churches of the Soviet bloc" taking place in the presence of several hundred listeners in the Auditorium Maximum of the Jagiellonian University in Krakow. The conference was organized by the Institute of National Remembrance (IPN) and its Hungarian counterpart, the Committee of National Remembrance (Nemzeti Emlékezet Bizottság),along with the IPN Branch Office in Cracow  on ​​the occasion of the 40th anniversary of the election of Cardinal Karol Wojtyła as the Head of the Church.

At the beginning, the secretary of state in the Chancellery of the President of the Republic of Poland Andrzej Dera read a letter addressed by President Andrzej Duda to the participants of the meeting. Fr. prof. Józef Marecki, passed on a message sent by the metropolitan of Kraków Archbishop Marek Jędraszewski to the participants.

- On the day of electing Karol Wojtyla as Pope, the "Communist Manifesto" lost to the Gospel. It was the victory of good over evil, love over hatred, the victory of truth over lies - said Jarosław Szarek, President of the Institute of National Remembrance in the speech opening the conference

On behalf of NEB, the scientific meeting in Krakow was opened by its chairperson, Dr hab. Réka Földváryné Kiss. The first panel discussion was led by the head of the IPN Branch Office in Krakow, Dr hab. Filip Musiał. The Krakow Branch of the IPN is the co-organizer of the conference.

The main topic of the meeting is the situation of Christian Churches in communist dictatorships, with particular emphasis on the activities of Pope John Paul II as the spiritual leader of the Church. From 9 to 10 October, the first part of the conference will be held at the Auditorium Maximum of the Jagiellonian University in Cracow. The second part of the event will take place in Budapest in Hungary. The location of the official closing of the conference on 12 October will be the Hungarian Parliament.

On 16  October 1978, Karol Wojtyła, Archbishop of Cracow, was elected to the Holy See. The Pope was a Pole who personally experienced two totalitarian regimes of the 20th century: Nazism and communism. On 22 October, during the holy mass inaugurating
his pontificate, John Paul II, today a Saint, addressed Poles with the famous words:  "Do not
be afraid!"

The activities of the Polish Pope had significantly contributed to the fall of the communist dictatorship in Central and Eastern Europe. His papal ministry gained enormous prestige making  John Paul II the most influential spiritual leader of the 20th century.