81 years have passed since the NKVD started massive persecution of Poles in the Soviet Union. It resulted in the loss of at least 111 thousand of our compatriots (estimated data indicates even 200,000 murdered), and almost 29 thousand people sent to labor camps. Despite such a high balance of victims, the crimes of the years 1937-1938 are still forgotten. Therefore, researching and popularizing knowledge about the Soviet genocide is one of the main tasks of the Institute of National Remembrance.

On 11 August 2018, Dr. Jarosław Szarek, the President of the Institute of National Remembrance, paid homage to the victims of the Soviet repression at the Monument to the Fallen and Murdered in the East (at Muranowska St. in Warsaw). The celebrations were organized by the Institute of National Remembrance together with the Office for War Veterans and Victims of Oppression.

During the ceremony, President of the Institute of National Remembrance emphasized that the NKVD's crimes against Poles in 1937-38 were forgotten for many years, but for several months they has been systematically recalled by the Institute. He also reminded that the IPN sent a letter to the Warsaw authorities with an appeal to build a monument to Polish victims of the NKVD from the Great Terror period. "No one responded to this letter" - said Dr. Szarek, stressing that the appeal is still valid. In his opinion, the great victory is that despite the crimes of the NKVD on Poles, carried out only because of their nationality, after several dozen years in the areas where extermination took place, Poland and Poles are thriving. The president announced that thanks to the work of the Institute of National Remembrance in a few weeks in Zhitomir, in a place where thousands of Poles were murdered at that time, a History Point (Przystanek Historia) will be opened as a response to the request of Poles living there... to keep in touch with their homeland, to celebrate its history and identity." The head of the Institute of National Remembrance also stressed the importance of the victorious Warsaw Battle of 1920, which stopped the Soviets.

During the ceremony, on the monument commemorating the victims of the NKVD, a new element dedicated to the Victims of the "Polish Operation" 1937-1938 was unveiled. It is a commemorative plaque in the shape of a railway sleeper. The Institute of National Remembrance was its originator and founder. The plaque has been designed by Maksymilian Biskupski, the author of the monument.

Later, a prayer was said followed by a Remembrance Appeal with a salute of honor and laying flowers at the monument. Commemorative letters from President Andrzej Duda and Prime Minister Mateusz Morawiecki were read.

IPN has also commemorated vitims of the "Polish operation" of the NKVD in several other Polish cities.

On 11 August 1937 Nikolai Yezhov, the People's Commissar for Internal Affairs of the USSR (head of the NKVD) issued order No. 00485, under which, on suspicion of belonging to the fictitious Polish Military Organization (POW), no fewer than 139 835 people were repressed, 111 091 of which were  murdered, mostly with a shot in the back of the head.

The anti-Polish operation carried out by the NKVD was unprecedented in the scale of crime and cruelty. Poles died almost forty times more often than other citizens of the USSR. Moreover, under the order No. 00486 of 15 August 1937, also issued by Yezhov, the wives and children of the convicted "traitors of the Fatherland" were subjected to repressions.

"NKVD conducted the arrests according to special lists prepared by local authorities. Mere shadow of suspicion - any connection with Poland, the slightest manifestation of attachment to Polishness or religion - was sufficient to find a person guilty. The lists were approved by Yezhov and Andrey Vyshinsky, Procurator General of the Soviet Union. However, this was only a formality. From the preserved documentation we know that two thousand such approvals were issued every day. (...) Descriptions of the arrests are no different from the reports about German pacification of villages in occupied Poland," Jarosław Szarek, President of the Institute of National Remembrance, wrote in the introduction to the "Anti-Polish Operation of the NKVD 1937-1938 ", published by the Institute in 2017.

As he recalled, Yezhov continuously informed Stalin on the course of the anti-Polish action, to which he responded with the words: "Very good! Keep digging to remove this Polish dirt."

Despite such a huge scale of crime, the "Polish operation" of the NKVD from years 1937-1938 to this day has not functioned in collective consciousness. In the times of the Polish People's Republic, terror of the 1930s was reduced to the "period of Stalinist errors and distortions", when members of the Communist Party of Poland were the only victims. In the memory of the West, on the other hand, the Great Terror is identified only with the publicized show trials of the leading Bolshevik leaders.

On 11 August 2017 in Warsaw, for the first time, state celebrations of the anniversary of the Soviet genocide on Poles took place. In connection with the 80th anniversary of mass murders on Polish citizens in the USSR, the Institute of National Remembrance has prepared a special educational website operacja-polska.pl entirely devoted to the victims of the NKVD crimes. The website has been prepared in cooperation with the Center for Polish-Russian Dialogue and Understanding. It features witnesses 'accounts, documentary films, popular science articles, documents from the Soviet archives, timetable of crimes, a map of memorial sites, and a database of the victims. The Institute is determined to document by name and surname the largest possible number of people executed as part of the "Polish operation" of the NKVD. 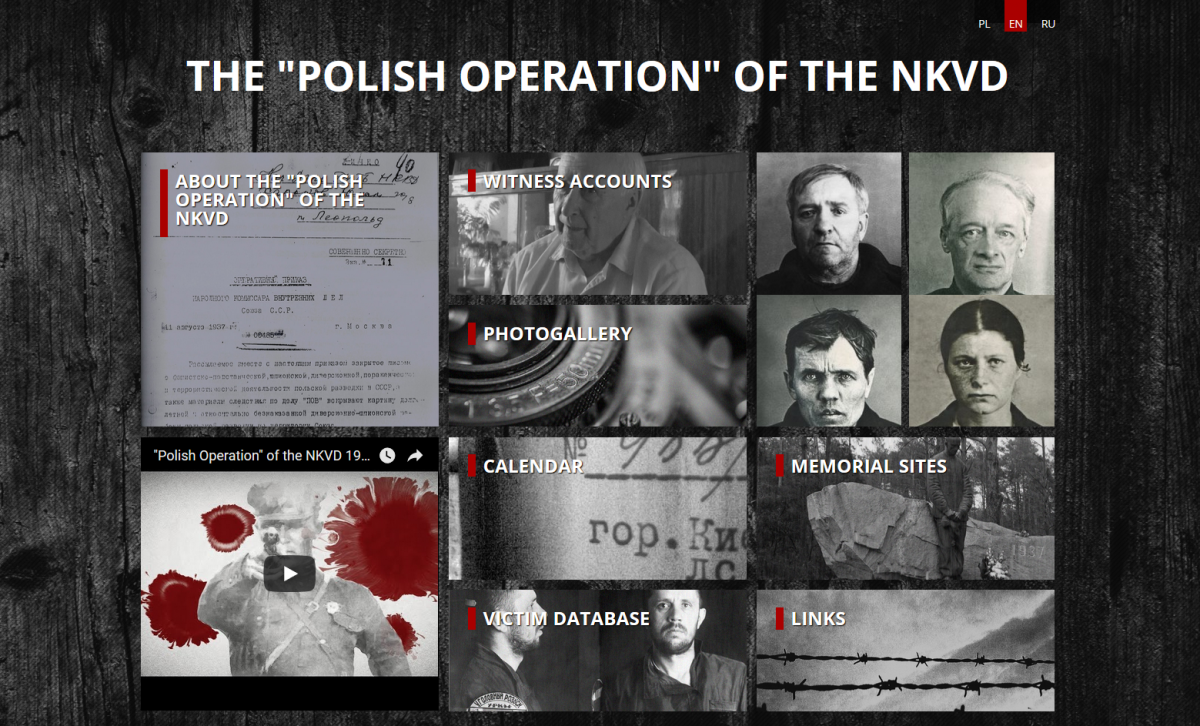