Poles have always refused to their fate being decided by others. The nineteenth-century January Uprising – a heroic guerrilla war against the Russian occupier – fits in this attitude. 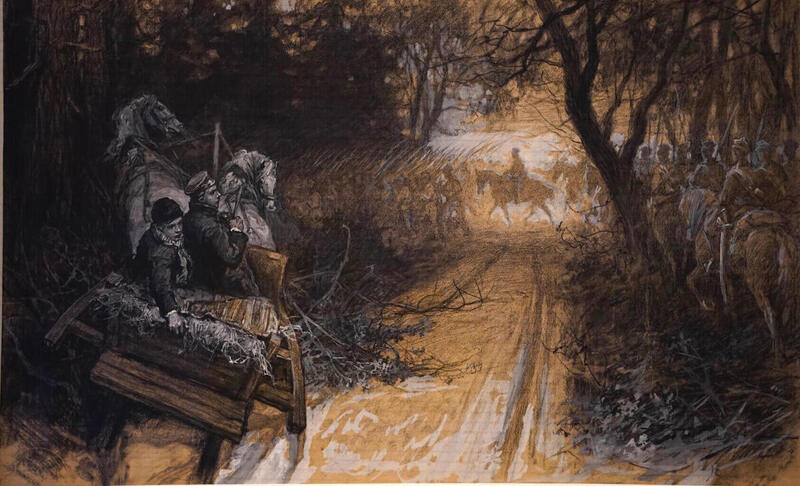 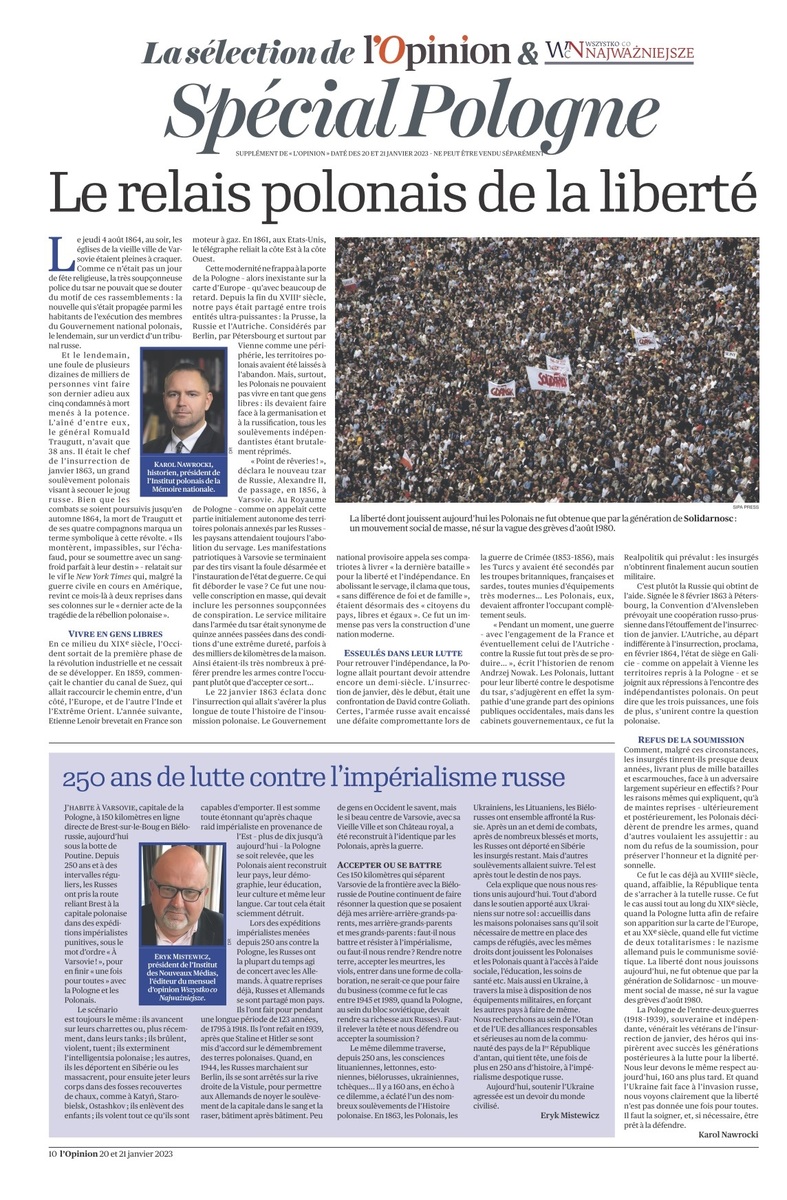 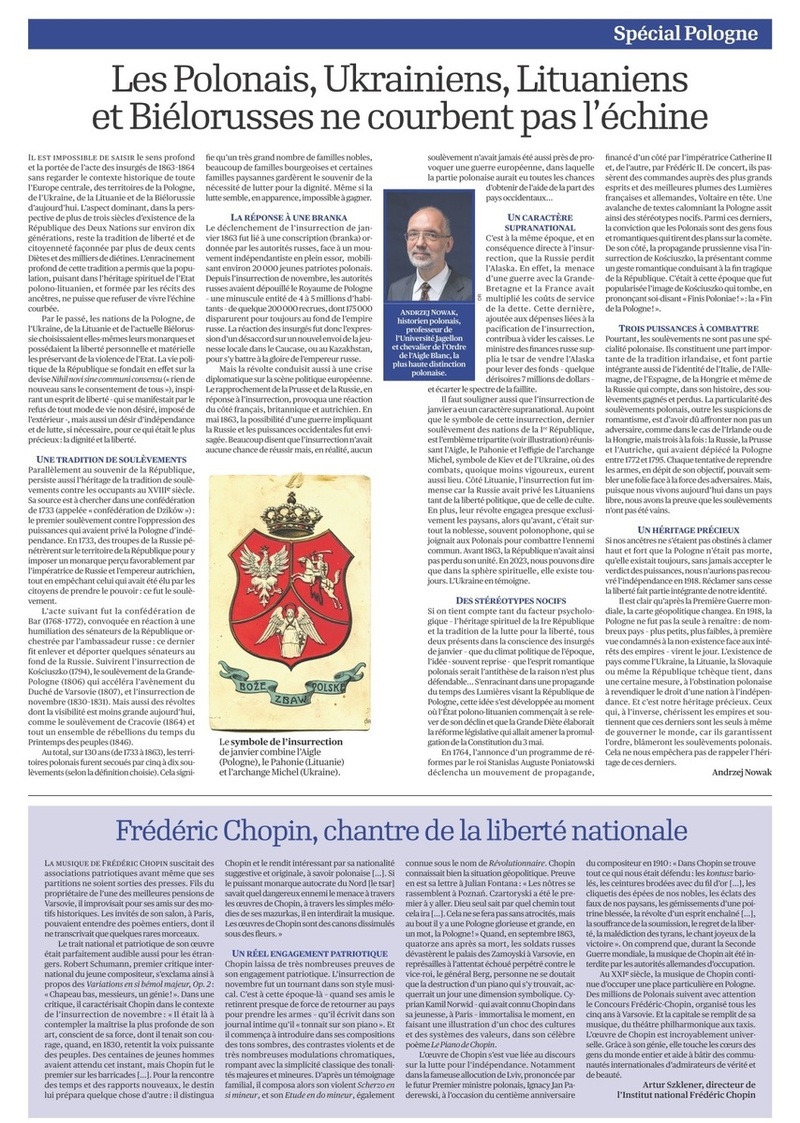 On Thursday evening, 4 August 1864, the churches in Warsaw’s Old Town were bursting at the seams. It wasn’t a holiday, and the heedful tsarist police guessed the reason for such large church gatherings. Word had spread among the citizens that members of the Polish National Government would be executed the following day by order of a Russian court.

The next day, a crowd of several thousand people silently bid farewell to the five condemned men on their way to the gallows. The oldest of them, General Romuald Traugutt, was only 38 years old. He was the leader of the January Uprising, the great Polish rebellion against the Russian yoke. Although the fighting continued into the autumn, the death of Traugutt and four of his comrades was the symbolic end of the insurrection. „They stepped upon the scaffold firmly, and underwent their fate with perfect […] composure,’ the New York Times reported shortly after. Even though America was in the throes of civil war, the newspaper made space for the account of “the last act in the tragedy of the Polish rebellion” twice in those August days.

To live a free man

In the mid-19th century, the West is already over the first phase of the Industrial Revolution – and still developing. In 1859, the construction of the Suez Canal begins, radically shortening the route from Europe to India and the Far East. A year later, in France, Étienne Lenoir patents his internal combustion engine. In 1861, the telegraph connects the American east and west coasts.

To Poland, absent from the world map, modernity arrives long delayed. Since the end of the 18th century, the country has been divided between three mighty powers: Prussia, Russia and Austria. Berlin, St Petersburg and, especially, Vienna consider the Polish lands peripheral and treat them with neglect. But this is not the only problem. Poles cannot live a free life. They have to defend themselves against Germanisation and Russification, but all revolts for independence are brutally suppressed.

“No dreams!” declares the new Russian Tsar Alexander II when he visits Warsaw in 1856. In the Kingdom of Poland – as the initially autonomous part of the Russian partition is called – the peasants are still waiting for enfranchisement. Patriotic demonstrations in Warsaw end with fire being opened at the defenceless crowds and martial law being introduced. New conscription to the army, which was to include the conspiratorial activity suspects, is the last straw. The recruits face 15 year-service in the tsarist army, in dire conditions and often thousands of kilometres from home. Many prefer to fight rather than accept such a fate.

Thus, on  22 January 1863, an uprising breaks out, becoming the longest of the Polish post-partition rebellions. The provisional National Government calls its compatriots “to final battle” for freedom and independence. At the same time, it proclaims the enfranchisement of peasants and emphasises that all people, “regardless of faith and ancestry”, are “free and equal Citizens of the country”. It is a big step in the rise of the modern nation.

All their efforts notwithstanding, the Poles still had to wait more than half a century for their independence. The January Uprising was a clash between Goliath and David. While the Russian army had suffered an embarrassing defeat in the Crimean War (1853-1856), it was not just against the Turks, who were supported by the modernly equipped armies of the Western states: Britain, France and the Kingdom of Sardinia. The Poles, however, had to fight alone.

“Involvement of France and, possibly, Austria in the war against Russia seemed to hang in the balance for a while…” says acclaimed historian Andrzej Nowak. A large part of Western public opinion sympathised with the Polish people fighting for freedom against tsarist despotism. But in the government cabinets, a peculiarly regarded Realpolitik prevailed. Military aid for the uprising had never arrived.

In fact, it was Russia that received support. The Alvensleben Convention, signed on  February 8, 1863 in St Petersburg, provided for Russian-Prussian cooperation in suppressing the January Uprising. In February 1864, Austria declared the state of siege in Galicia – as they called the lands seized from the Republic of Poland – despite being initially indifferent to the insurrection, and thus joined in the repression of Polish independence activists. It can be fairly said that the three partitioners once again united against the Polish cause.

One can ask why, despite all of this, the insurgents fought for almost two years, in more than a thousand battles and skirmishes, against the superior Russian army. Well, for the same reasons they picked up arms when others wanted to subjugate them many times before and since – they did it to preserve their honour and personal dignity, and because they refused to be enslaved. That was the case even back in the 18th century when the weakened Polish Republic tried to break free from Russian supervision, or throughout the entire 19th century when Poland struggled to return to the world map. And it was so in the 20th century when the country fell victim to two totalitarian regimes: German Nazism and Soviet communism. The long-lasting freedom we enjoy today had been won only recently by the generation of “Solidarity” – a great social movement born of the wave of strikes in August 1980.

Pre-war independent Poland (1918-1939) displayed great respect to the veterans of the January Uprising – the people who inspired subsequent generations to fight for freedom. Today, one hundred sixty years later, we owe them the same respect. As Ukraine defends itself against the Russian invasion, it is all too clear that freedom is not a given. We need to cherish it and, when necessary, stand up and fight for it.