PRESS RELEASE: The 75th anniversary of the tragic events of 4 July 1946 from the perspective of Western researchers - Kielce, 2 July 2021, at 10.00 a.m. The event will be broadcast on IPNtv 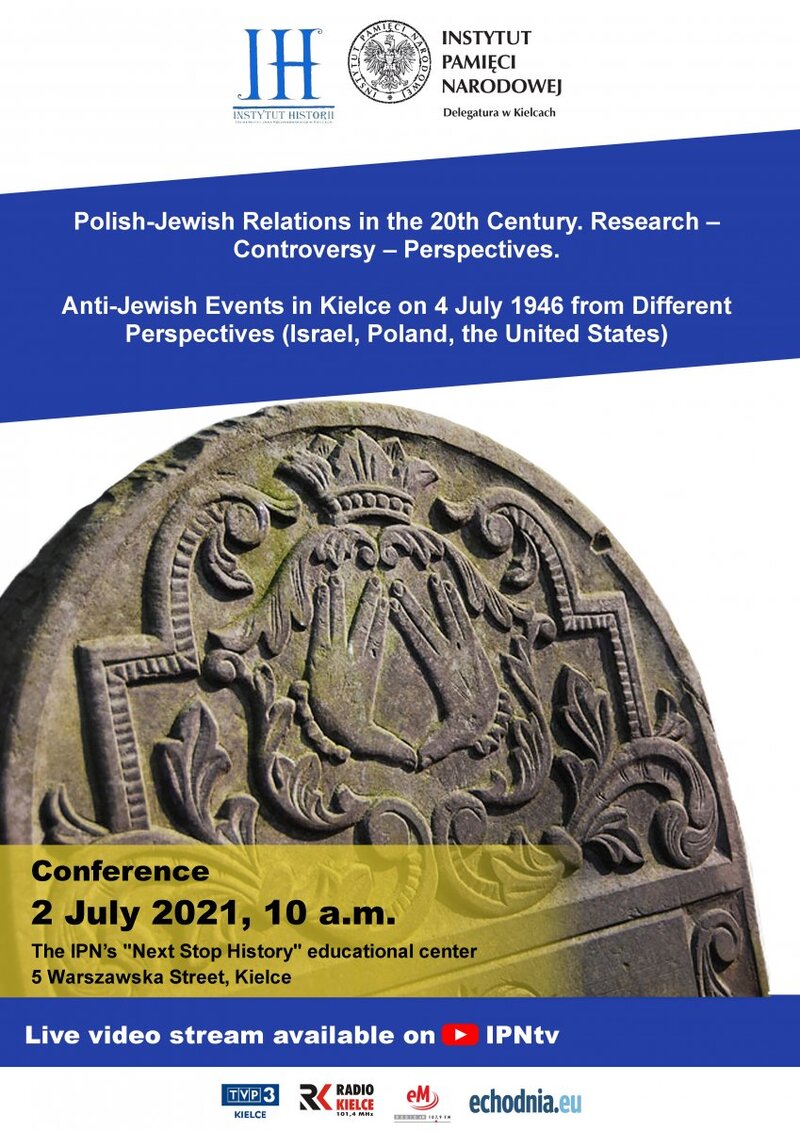 The Institute of National Remembrance, Kielce Sub-branch and the History Department of the Jan Kochanowski University would like to invite you to an academic conference: "Polish-Jewish relations in the 20th century. Research - Controversy - Perspectives. Anti-Jewish events in Kielce on 4 July1946 from different perspectives (Israel, Poland, the United States)". The meeting will start on 2 July at 10:00 at the IPN’s "History Point" Educational Center in Kielce (5 Warszawska Street). The conference will also be broadcast live on IPNtv.

The anti-Jewish events which took place in Kielce on 4 July 1946 still arouse great interest among researchers. Numerous monographs, collective publications and texts have been published on the subject. The keynote of this year's edition focuses in particular on the image of the dramatic events which took place at 7 Planty Street in Kielce, in both Polish and international research. The conference will also be an opportunity to find out more about the attitude of Jews towards the Polish diaspora in Palestine and Poland’s position in the international arena in 1946. The participants of the event will also discuss such issues as the Kielce pogrom as portrayed in the American press of 1946. The final point of the conference will be a panel discussion with the participation of all of the speakers.

We warmly encourage you to take part in the event, which will not only be a platform of academic exchange but also an opportunity to build interpersonal relations, including Polish-Jewish relations, and better understanding of the shared history of both nations.

Opening of the conference

Prof. Witold MĘDYKOWSKI The perception of the Kielce pogrom and its impact on the attitude of Jews towards Polish refugees in Palestine and on the international arena (online)

Prof. Jakub TYSZKIEWICZ The pogrom in Kielce in the light of American press writings in 1946 (online)

This year marks the 75th anniversary of the tragic events which took place in Kielce on 4 July 1946. The ceremonies commemorating the victims of the pogrom of the Jewish population will begin on Sunday, 4 July at noon in front of the tenement house at 7 Planty Street. The Head of the IPN’s Sub-branch in Kielce, Dorota Koczwańska-Kalita, Ph.D. and the Director of the IPN’S Branch in Krakow Filip Musiał Ph.D.,D. Sc. will pay tribute to the victims.

The tragic events were triggered by a false rumor that a child of one of the residents had been kidnapped by a Jewish neighbor. As a result of anti-Jewish sentiment shared by part of the society and the unbelievable passivity and inefficiency of those who commanded the law enforcement and military forces a mass murder of the Jewish population took place. Thirty-seven Jews and three Poles were killed at 7 Planty Street, 35 Jews being injured. On 4 July 1946, in Kielce and the surrounding area, other incidents occurred in which the victims were Jews. Such events were noted in the vicinity of the train station and on trains running from Kielce and to Kielce.