The opening of exhibits devoted to Cpt. Witold Pilecki and Lt. Col. Łukasz Ciepliński (on the 70th anniversary of the latter’s death), and other commemoration initiatives of the Institute of National Remembrance. 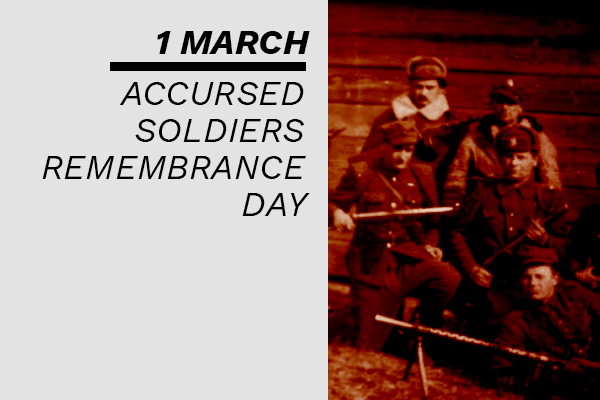 Outdoor exhibitions commemorating the lives of Witold Pilecki and Łukasz Ciepliński were opened by the IPN’s President Jarosław Szarek at noon on 1 March at Lot "Ł" of the Powązki Military Cemetery in Warsaw. Both are examples of so-called “basic exhibits”, the first items in a new biographical project by the Office of National Education, aimed to present the most important issues from Poland’s modern through her most exceptional sons and daughters. The exhibits will be available until November.

In addition to the expositions, at 3 p.m. that day, Jarosław Szarek is unveiling Łukasz Ciepliński memorial plaque at the Museum of Cursed Soldiers and Political Prisoners in Rakowiecka Street. It is in this prison and detention centre that from January 1945 the Soviet NKVD, and later on officers of the communist Ministry of Public Security, imprisoned, tortured and executed Polish patriots. This is the place where on 1 March 1951, Lt.Col.  Łukasz Ciepliński and six of his associates of the WiN 4th Main Board were murdered with a shot to the back of the head.

A number of other events, initiated or supported by the IPN, will commemorate the Accursed Soldiers. They include “On Wolf’s Trail: the Songs of the Accursed” musical performance to take place in Gdańsk, at 6 p.m. on 27 February, or a gala concert from Cracow Concert Hall at 8 p.m. a day later, both streamed on the Institute’s YouTube page. On 1 March, the Office of Search and Identification’s social media will broadcast new episodes of the walk around Lot “Ł”, and the Office head, Krzysztof Szwagrzyk, will brief the viewers into the excavation work he and his team carried out there between 2012 and 2017.

The 11th National Accursed Soldiers Remembrance Day is a good opportunity to release the long-awaited second edition of „Atlas polskiego podziemia niepodległościowego 1944–1956” [The Atlas of the Polish Independence Underground in the Years 1944-1956]; as part of its promotion, on 1 March, the IPN’s YouTube website will air a debate of experts devoted to the publication.

The Institute has also released “Tak było. Wspomnienia partyzanta 3. i 5. Wileńskiej Brygady AK Józefa Bandzo ps. „Jastrząb”. [ That’s the Way it Was. Memoirs of Józef Bandzo, codename “Jastrząb”, a Partisan Soldier of the 3rd and 5th Home Army Vilna Brigade], an audio book published in hard copy in 2019, and “Anoda”, an urban game for smart phones, designed to make players familiar with Jan Rodowicz, codename “Anoda”, a legend of the Gray Ranks, a Warsaw Insurgent and 1949 victim of communist torture.

The National Accursed Soldiers Remembrance Day "is a tribute to the soldiers of the second underground resistance for their bravery, deep love for Poland, fond regard for patriotic traditions, and the blood they shed for their country," reads the explanation for establishing the commemoration.

This year, we are celebrating the Day, established by the Sejm of the Republic of Poland at the request of President Lech Kaczyński, for the eleventh time. The initiative was continued by the next president, Bronisław Komorowski, and also Janusz Kurtyka, the second head of the IPN was its great proponent.

The issue of "Accursed Soldiers" gained wider recognition only in the early 1990s, as a result of the dedicated exhibit prepared by the Republican League at the Warsaw University in 1993. It was its title, "Accursed Soldiers – the Anti-Communist Underground after 1944", that popularized the collective term for people denounced by the communist regime that took power in post-war Poland. However, the nickname also reflected the fact that the soldiers who offered armed resistance to Soviet and communist enslavement were equally branded and doomed to oblivion by the political establishment of the 3rd Polish Republic.

The National Accursed Soldiers Remembrance Day is observed on 1 March, the anniversary of the 1951 murder of the last, 4th Board of the Freedom and Independence organization (WiN), the post-war follower of the Home Army’s struggle for independence. It is, however, not just WiN members who are commemorated on that day, but all people who fought for our freedom after World War II. Among many organizations who brought them together special mention is owed to the National Military Union, but also tens of thousands of civilians who supported the anti-communist underground any way they could deserve recognition today.

On 1 March 1951, following a rigged trial that brought a harsh verdict, the Mokotów prison in Warsaw saw a brutal, Katyn-style murder of seven members of the 4th Main Board of the "Freedom and Independence" Association: Lt. Col. Łukasz Ciepliński, Maj. Adam Lazarowicz, Maj. Mieczysław Kawalec, Cpt. Józef Rzepka, Cpt. Franciszek Błażej, Cpt. Józef Batory and Cpt. Karol Chmiel. The communists buried their bodies in a nameless pit, which is still waiting to be found.