I was a sewer rat. Young Warsaw insurgents beneath the streets of the fighting capital.

The account of Bogusław Kamola codename “Hipek” – a 14 years old Home Army soldier fighting in the 227th scout platoon (Sewer Rats) during the Warsaw Uprising – is a source of knowledge concerning the insurgent sewer communications and at the same time indirectly exposes the Communist disinformation conveyed in the film “Sewer”. 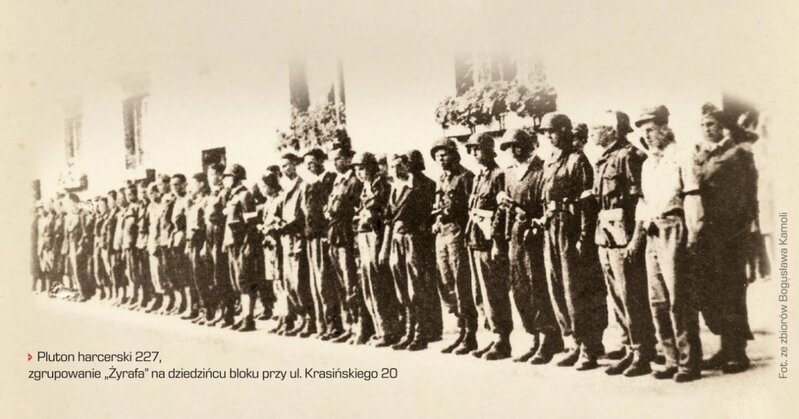 “At the Żoliborz district, first shots were fired at around 2 pm., even before hour <<W>>. It was connected with the operation of moving weapons near the Suzin Street. The Polish Home Army unit […] stumbled upon a German patrol and a shootout broke out” [the unit was led by Zdzisław Sierpiński “Marek Świda”].

For that reason, the uprising at Żoliborz was pushed forward.

I believe this unfortunate incident was what caused all the confusion concerning the mobilisation of the Home Army. The Żoliborz operation was a signal to the Germans, that there indeed would be some kind of a fight or an armed resistance. Hence, all the German forces at the capital were put on maximum combat readiness.

The Żoliborz events prevented the barely 14 years old Bogusław Kamola from receiving the order to mobilise. He hadn’t learned about it until August 4th. He had to be clever in order to join his squad.

I was reached by the platoon’s runner. He told me the platoon was up and running, mobilising. And of course, that it would be best if the joining soldiers would come armed. […] My dad was a weapons’ supplier of the whole <<Żywiciel>>, then of the <<Żmija>> group. Due to that fact, we had lots of weapons buried in the basement. I decided to dig it out. […] In the evening, I secretly went down to the basement and dug out the <<efenka>> handgun [Browning M1910/22], the one with an extended barrel and 53 bullets, so quite a lot, and another magazine. I prepared all that and left the apartment in the morning unnoticed. The German guards at the outposts didn’t see me and I sneaked through an oil mill to the Rudzka Street and from that to the Vistula river. After that, I went  through river canes to the Potocka Street. The first insurgent units were already stationed there. That’s how I ended up at the Krasiński 20 Street.

Troops of the 227th scout platoon, which after August 10th was included in the “Żyrafa” group, were stationed there.

When I joined the platoon, I discovered that all of its soldiers were either my friends from junior high, or from secret schools, or from where I lived. We, the Żoliborz youth, were always involved in something. Since it was all conspiracy, absolutely no one told each other about it. We knew each other, but we didn’t know who was in the other scout teams. They weren’t people from nowhere, quickly organised into a unit. We knew each other very well, which gave us enormous strength and encouragement.