Slovak participation in the war. Occupation of Polish mountain regions

As in conquered Warsaw the symbolic beginning of the occupation was the German victory parade, near the Tatry mountains it was the victory parade organised by the Slovak army in Zakopane. 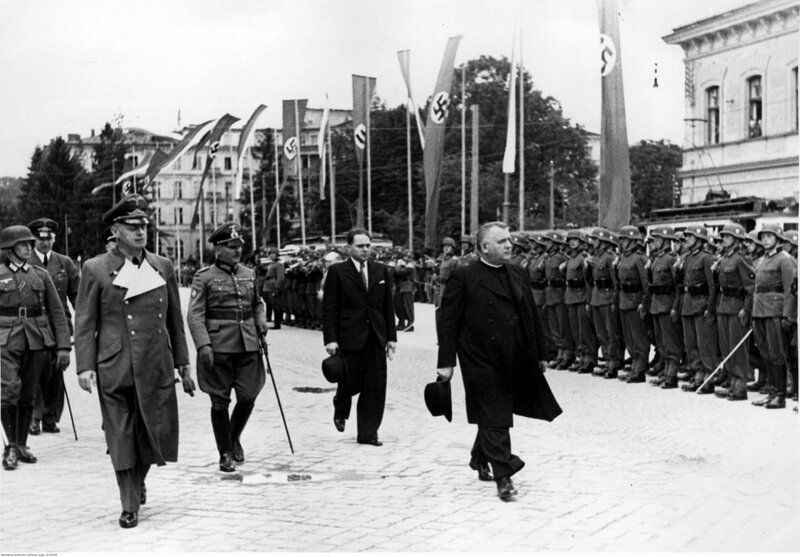 “We are proud that we could seal the German-Slovak friendship with the effort and blood of Slovaks” – stated the Slovak minister of propaganda Alexander Mach in a speech from October 4th 1939.

Only half a year prior, nothing pointed to such a turn of events. When Slovakia declared its independence on March 14th 1939, Poland welcomed it with enthusiasm. It was one of the first countries to acknowledge the newly created state. It did so on the very next day, March 15th 1939. Unfortunately, the corrections of Polish-Czechoslovakian border – made in autumn 1938 – already weakened the pro-Polish sympathies of the ruling party of Slovakia.

The Slovak leader, pr. Joseph Tiso hedged his bets on the alliance with Germany. It was no accident, that anti-Polish propaganda strengthened in Slovakia month after month. Alexander Mach – not only the minister of propaganda, but also the leader of the paramilitary Hlinkova Garda – on August 21st 1939 gave a speech full of hatred towards Poland, stating territorial demands. In response to the Polish protest, the Slovakian government officially confirmed Mach’s demands.

Many Slovakians did not understand the anti-Polish policy of their government. Some garrisons refused to take part in a war against Poland.  However, the Slovak state institutions clearly supported the German aggression. In the northern regions of the country, the infrastructures needed by the Germans to attack Poland were quickly prepared. The Slovaks modernised the roads leading to the Polish border and handed the Germans intelligence on the locations of Polish units, as well as shared their railway lines. They allowed them to place ammunition and gas warehouses near it and allowed the German bombers to use the airfields in Spišská Nová Ves, Vinné and Piešťany. It was here from where the planes which later dropped bombs on Cracow and Warsaw took off. Not long after, in the near border regions, the German armoured and mountain divisions showed up. “We support the allied German army which in these decisive moments comes to defend the independence and territorial integrity of the young Slovak state – against the Polish threat” – said the government’s statement.

Slovakia also began its own preparations to invade Poland. In August, ten classes worth of reserve soldiers strengthened the army and some of the units from the south were moved up to the north. Border incidents amounted. During one of them, on the night from August 24th to 25th, a Slovakian unit attacked the railway tunnel of the Łupków-Cisna line in the Bieszczady mountains, protected by the Polish Army and Border Guard. The day after, on August 26th, soldiers of the Border Guard were shot at by three German soldiers at the Głodówka pass.

The combat readiness of the Slovakian military and paramilitary organisation was announced on August 28th. The Slovakian army reached 150 thousand men – the biggest in its history. The “Bernolak” Army, counting 50 thousand soldiers, was to attack Poland. It consisted of three divisions: “Janosik”, “Škultéty”, “Rázus”, and manoeuvre group “Kalinčak”. The supreme commander became the minister of defence, gen. Ferdynand Čatloš.

At the session of the government from August 30th, Tiso stated: “We are ready to march with the Germans”.