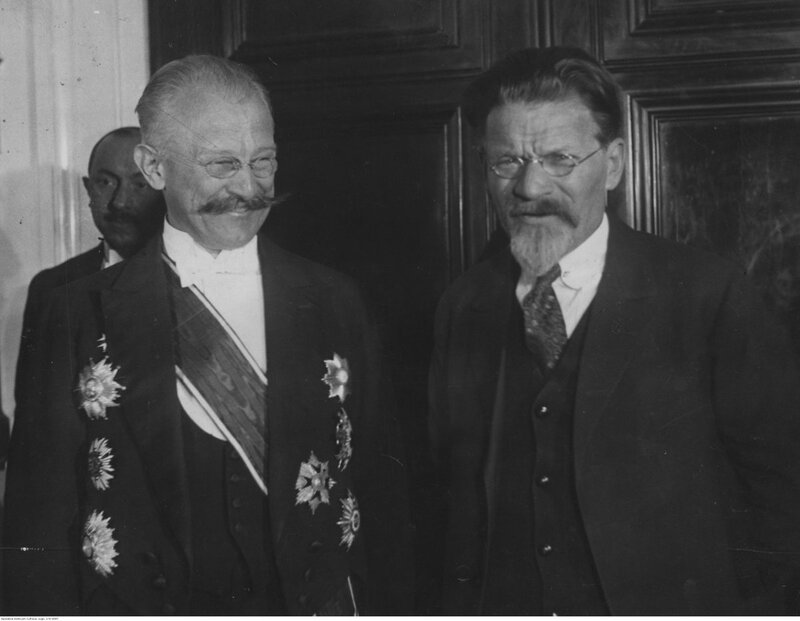 The peace treaty concluded in Riga on March 18, 1921, ended the state of war between Poland and Soviet Russia. This pact gave the partners to the agreement an opportunity for peaceful coexistence, yet certainly not for long when considering the assumptions of communist ideology with a world revolution being its inherent element. Thus, Moscow consistently avoided implementing the Riga decisions (this mainly concerned financial obligations). It quickly turned out that the Kremlin would ruthlessly use the lack of precisely specified sanctions for failure to fulfill the obligations of the peace treaty to its own advantage. The credibility of the Bolshevik side did not increase with the so-called Karachan-Dąbski agreement of  7 October 1921, especially when, only a few weeks after its conclusion, Maxim Litvinov, the then deputy People’s Commissar for Foreign Affairs (PCFA), in a letter to Lev Karakhan, the Soviet representative in Warsaw, recommended an uncompromising stance towards Polish complaints, as well as hardline pressure and Soviet claims against Warsaw.

As for the Polish assumptions regarding Eastern policy, they were best reflected in the memorandum of the Ministry of Foreign Affairs (MFA) in early 1922, though undoubtedly prepared earlier. This document clearly stated that the time had come to establish peaceful relations with Soviet Russia and to abandon any attempts at active intervention, as well as support for various groups of Russian emigrants. Despite the great determination of the Polish government to finally regulate mutual relations, the following months, unfortunately, did not bring any significant improvement in this regard. The Bolsheviks continued to blame Poland for tolerating the "White Guard" there and for preparing another war, while they themselves kept delaying, for example, the procedures related to the recovery of Polish property. A certain novelty of the situation was the fact that signals of wanting to include Soviet Russia in a common economic body could be heard in European politics more and more. The PCFA quickly picked up on this by agreeing to participate in an international conference prepared in Genoa (April 1922). Polish diplomacy was extremely serious in its approach towards it, especially in the context of a possible review of the Western powers’ position regarding, for instance, a de jure recognition of Soviet Russia. According to the guidelines prepared by the MFA, Warsaw should have supported the Kremlin on the latter issue and, at the same time, oppose any attempts to weaken Russia's economy. In return, Soviet diplomats were to strive for the final confirmation of the borders established in Riga and refrain from supporting any territorial claims of Lithuania towards Poland. However, for Moscow, the agreement with the other "shunned person of Europe", namely the Weimar Republic (Treaty of Rapallo, 1922), was much more beneficial than the negotiations with France or England.

Given the threat of German-Soviet cooperation, and in the situation when the Entente powers were gradually recognizing the existence of the Soviet Union, the MFA first sought to sign a trade treaty with Moscow. However, Ludwik Darowski's mission (1924) aimed at normalizing relations with the eastern neighbor on such a basis failed. Specific conclusions were drawn from these events at Wierzbowa Street [translator's note: the seat of the Ministry of Foreign Affairs]. It became clear that relations with the USSR, a country that was differently organized, also in terms of the economy, could only be based on politics inscribed in a wider "geopolitical context" on the old continent. That is why the then Minister of Foreign Affairs, Aleksander Skrzyński, initially accepted (November 1924) the Soviet proposal to sign a bilateral pact of non-aggression. There were excellent grounds for the negotiations: the year 1924 brought new trends in how Germany was treated by the Western powers (such as the Dawes Plan, which made it easier for them to pay off the war reparations), which threatened to isolate Poland on the international arena but also weakened the existing cooperation between Berlin and Moscow.

For the Soviet Union, the primary task was to draw Germany away from closer relations with the West. Hence, Grigory Chicherin, the head of the PCFA, wanted not so much to talk as to prolong the talks with the Poles to scare the Germans a little with the prospect of rapprochement with the Republic of Poland, and to consolidate further relations with them based on the provisions from Rapallo. The PCFA’s allergic reaction to the Polish suggestion from January 1925 to extend a possible pact by Romania and the Baltic republics is evidence of this, although it would also be favorable for Moscow, among other things, precisely because of the benefits it derived from the Treaty of Rapallo. However, it should also be added that in the PCFA all of Skrzyński’s speeches on the desire to peacefully settle relations between the two countries were taken at face value, without looking for any hidden agenda in them. For good reason, as the Polish tactic was indeed quite unsophisticated: Warsaw needed a guarantee of the eastern border’s inviolability while in the West there was more and more talk about the possibility of revising the Versailles decisions (the Locarno Treaties, 1925).

The May Coup, contrary to what it might have seemed, did not change the priorities of Polish foreign policy – neither in general nor concerning the Soviet Union. Rather, to some extent, Skrzyński's line was continued, of course by other means and by other people. Additionally, Józef Piłsudski did not believe in the durability of the alliance with France. Therefore, this outlook made it necessary not so much to revise the current concept of Polish foreign policy but to counteract the German and Soviet rapprochement more firmly than before and to maintain – at least superficially – an equal distance between Poland and Germany and between Poland and the Soviet Union. In view of the passivity of Paris, Warsaw simply had to focus on bilateral regulations with its neighbors and in this way try to weaken the Rapallo line.

After several years of negotiations conducted by the emissary of the Republic of Poland in Moscow, attorney Stanisław Patek, on 25 July 1932, both parties signed the so-called pact of non-aggression. In 1932, and later, this document was one of the most important axes around which the strategy of foreign policy was built (Józef Beck's ministry). But rapprochement with the Kremlin, according to Beck (Piłsudski!), should not have made Poland's ties with other partners too difficult or complicated. Thus, the true addressee of the improvement of bilateral relations with the East was, above all, Germany, and the essence of the matter was the equal distance between Warsaw and Berlin and Moscow.

The tragedy and unreality of the "policy of equilibrium" was the fact that the doctrinal adherence to its assumptions often drove Beck into a corner, condemning him a priori to the rejection of various ideas – not always bad – appearing in Europe at that time. That is, Poland, for example, rightly denying the Italian idea of a "directorate of powers" opening the door for the Germans to change their borders in the east, had to seek support from the Bolsheviks in the fight against it. However, this gave the impression of a common front with the USSR and violated the principle of equal distance between Warsaw and Moscow and Berlin. Conversely, the Polish minister could not accept the concept that went down in history under the name of the Eastern Pact, i.e. a regional system of joint security with – in the original version – France, the Soviet Union, and Poland, and without Germany, or later with Germany, but marginalizing the role of Warsaw in the structure of Eastern European alliances. The French began to push the latter variant, simply presuming that Piłsudski would not agree to the pact without the Germans. The choice of the latter option actually threatened to intervene in Polish affairs, and it is difficult to judge what the qualitative difference would have been in replacing the French guarantees with Soviet ones in the event of German aggression. The first solution assumed the neutralization of Poland's western neighbor and, although imperfect, was probably more rational than the situation at the time in this part of the world.

In the second half of the 1930s, Warsaw could only be an observer of the changes in the European diplomatic arena. Even though she and the Kremlin did not participate in the Munich division of Czechoslovakia (Poland played out the matter of Zaolzie alone), Stalin actively attempted – as it turned out, successfully – to come to an understanding with Germany, which resulted in the Molotov-Ribbentrop Pact. The Polish side (Minister Beck, Ambassador of the Republic of Poland in the USSR, Wacław Grzybowski) did not recognize the actual intentions of the treaty and allowed itself to be surprised by the events of September 1939.