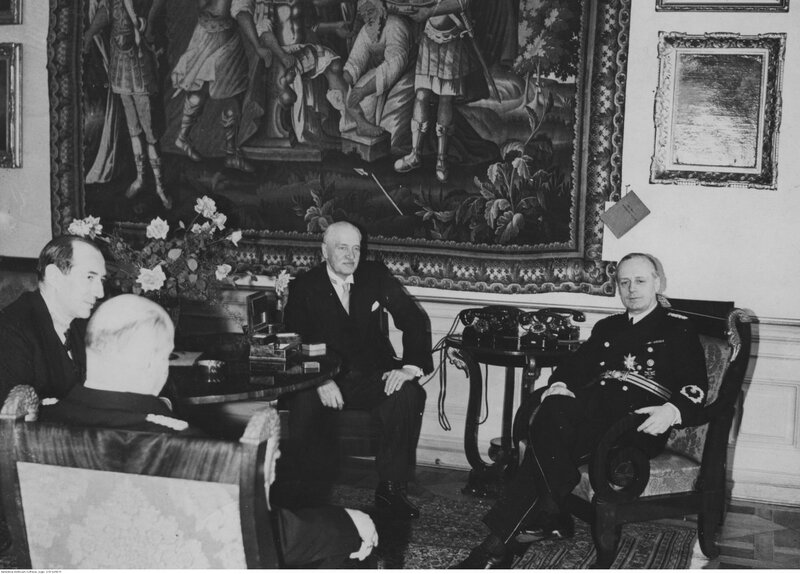 The Polish foreign policy of the 1930s, implemented by Józef Beck, was based on a programme idea formulated by Józef Piłsudski. Its basic principle was to achieve a balance, that is, neutrality, between the Soviet Union and Germany, completely excluding any possibility of an alliance with the Reich against Moscow and with Moscow against the Reich. In practice, this meant, among others, striving to maintain the Polish-German relations regulated by the declaration of non-violence of January 26, 1934 as long as possible. It was realized that a dangerous alternative could be the internationalization of the territorial conflict with Berlin, which, in the conditions of the appeasement policy pursued by Great Britain and France, threatened Poland with the role of an object of negotiations among the great powers. The Polish Ministry of Foreign Affairs, clearly emphasizing the sovereignty of the Republic of Poland, expressed only aspirations to the role of the leader of a possible Central European bloc, understood as a neutral sphere between Russia and Germany, and covering the area from the Baltic Sea to the Adriatic Sea.

In terms of methods of operation, Beck preferred bilateralism over multilateral obligations as being less complex and therefore more secure. At the same time, Polish diplomacy consistently maintained a programmatic distance from European (Nazi and communist) totalitarianisms, which was expressed in a clear refusal to allow the Polish state to become a component of one of the emerging ideological blocs.

The demolition of the Versailles order by Adolf Hitler could only take place through the domino effect: first Austria, then Czechoslovakia, finally Poland. Hence, Warsaw could not support the Anschluss of Austria (1938). But the fate of this country was not in Polish hands. The decisive vote of Neville Chamberlain's government determined the lack of help from the Entente, as the French applied the principle of accommodation to the British strategy in their actions. The situation was similar in the case of the partition of Czechoslovakia. On January 14, 1938, during Beck's conversation with Hitler, the German leader spoke about the difficulties of the German minority in that area. So he made a veiled appearance about future events, but Beck was hardly aware of what would happen in the coming months. A few weeks later (February 1938), Herman Göring, who was visiting Poland, tried to obtain an agreement in the form of a gentlemen's agreement. However, a similar agreement was never concluded. There is no doubt that, as a summary of these two meetings, there was only an exchange of declarations on mutual information about the actions of the parties on the international arena. When, on September 21, 1938, Warsaw made a direct demand to Czechoslovakia to grant local Poles the same rights as the German population in the Sudetes, Beck was convinced that there would be no intervention by the Western powers in defence of Prague. In September 1938, in Munich, there was a spontaneous emergence of a quartet of powers (Germany, Italy, Great Britain, France) deciding about the fate of Europe. Beck was afraid of leaving the Zaolzie case in the hands of Hitler, because formally these countries, and in practice Germany, decided whether to meet Poland's expectations or not.

It should be remembered that in view of the specific political attitude of Paris and London, the idea of ​​a new Polish-German agreement, stabilizing the status quo, was born in Warsaw in the years of 1936-1937. A year later, the essence of this calculation was the assumption that, at the cost of a neutral position of the Ministry of Foreign Affairs in the dispute over the Sudetes, Poland would be able to obtain from Hitler concessions in Gdańsk. Such efforts, based on the presented motivation, could not, however, bring success, because Berlin easily obtained concessions from Western countries and did not need Polish kindness for its own politics.

In late 1938, the concept of equilibrium was exhausted. Hitler saw Poland as a possible ally in the fight against Stalin. There could be no consent to this in Warsaw. Under the conditions of appeasement, the tactic of the Ministry of Foreign Affairs had no alternative to the principle of maintaining proper relations with Berlin, but only when reconciled with the aforementioned inviolable principle of balance and the preservation of Poland's independence. This can be seen in the conversation between Beck and Hitler on January 5, 1939. The German leader insisted on accepting the demands made on October 24, 1938, proving that the interests of Poland and Germany were united against the USSR. The head of the Polish Ministry of Foreign Affairs acted passively. He ignored the host's various remarks in silence, trying to focus on bilateral issues: the case of Gdańsk or the extraterritorial highway, but without echo. A joint communication on the renewal of the 1934 declaration was not produced, either. Therefore, according to Beck himself, the Polish-German relations were aimed at a military confrontation, about which the minister informed President Ignacy Mościcki and Marshal Edward Rydz-Śmigły on January 7, 1939. Not wishing to lead to the loss of independence in relations with Berlin, it was then decided to show full determination in every matter raised by its western neighbour.