The myth of the innocent Wehrmacht

The “myth of the innocent” Wehrmacht functioned in Germany until the mid-1990s. Literature and journalism included writings about the “clean hands of the Wehrmacht”, “the white legend of the Wehrmacht”, and even about the “knightly Wehrmacht”. Why was this possible, when in Poland, and even more so in the Soviet Union, the crimes of Wehrmacht soldiers were well known? They betrayed the glorious moral traditions of the German soldier 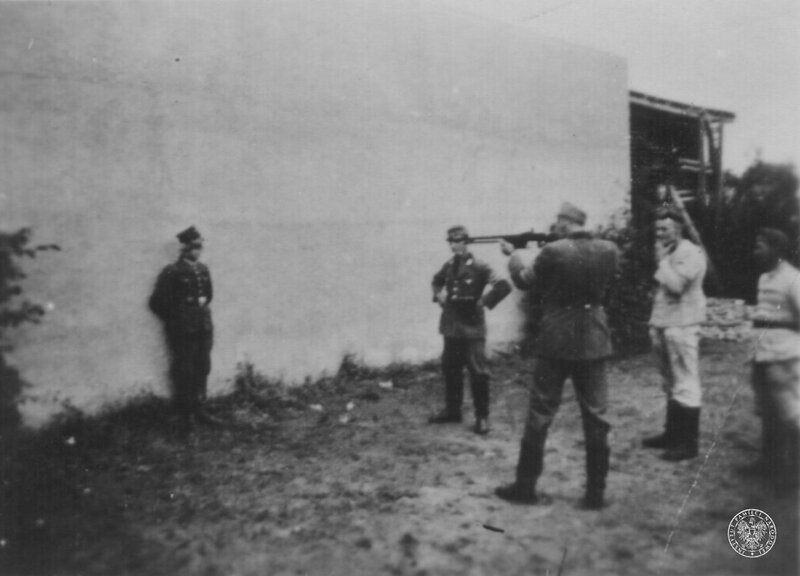 The Prussian army, and later the German army, was one of the first where patriotism, discipline, and the ethos of a soldier were the absolute basis. Senior officers most often came from old noble families, in which the military profession was passed on from generation to generation. After Hitler came to power in 1933, some Germans “out of disgust with Hitlerism” chose an officer’s career because it seemed that only the army still functioned in a decent atmosphere, free from Nazi influence. After expelling and removing from the senior commanders from service, however, their place was taken by younger ones, brought up in the National Socialist spirit and the “morality” that came with it. Kristallnacht or the Night of Broken Glass, the first massacre of Jews organised by the Third Reich, was a test for the servicemen. The military could react, but the commanders did nothing. The eminent German philosopher Karl Jaspers wrote: “[they] betrayed the glorious moral traditions of the German soldier.” The old military generation that managed to survive the purges became “corrupted by successes” over time, as it was put by German historian Guido Knopp. Successes on the front lines were lavishly rewarded by Hitler not only with promotions but also with material goods. Therefore, commanders and soldiers, especially those fighting in the East, had quickly forgotten that they were bound by international conventions regarding the treatment of prisoners and civilians. The declaration by Hitler of total war in the East (the so-called war of destruction) meant an order to break international law – civilians were to be ruthlessly treated and ultimately wiped out by hunger. The same was true of the captives. One of the German historians called the treatment of prisoners of war “the Wehrmacht’s own crime”. Over 3 million of them died, and they were under the orders of the Wehrmacht command. It is also clear that without the logistical help of the military, mass crimes in the east would not have been possible. The Wehrmacht supported the Holocaust partly passively and partly actively. Special units and the SS were not always able to murder enough Jews, so soldiers were often delegated to help. “Without the Wehrmacht, this genocide would not have happened,” the German historian Felix Römer stated unequivocally.

A Wehrmacht soldier entering Russia had supplies for 20 days. The Hague Convention on Land Warfare allows using the country’s economy by the occupation forces, but only to an extent that does not exceed the country’s economic capacity. The looting done by Wehrmacht soldiers condemned the local population to death by starvation – after all, it concerned feeding from 2.5 to 3.3 million soldiers!

“The psychosis of francs-tireurs” and “bloody amok”

In the autumn of 1939, during the organisation of the so-called provocation against Poland, Hitler ordered the Wehrmacht to keep away from all actions that are clearly illegal. Therefore, special SS units and the so-called Einsatzgruppen were created for special tasks, which mainly meant the mass murder of Jews. However, on 13 May 1941, the Decree on the Exercise of Military Jurisdiction was issued, establishing that crimes by German soldiers against Soviet civilians would not be prosecuted, which, of course, was contrary to the Geneva Convention. At the same time, for the sake of the soldiers’ discipline and morale, orders were issued that the army would not be unnecessarily incited and would not operate in a bloody amok. The diaries and memories from the Eastern Front show that this order could not be fully implemented. Wehrmacht soldiers shot prisoners of war and civilians under the pretext of “partisan actions”. It was called “the psychosis of francs-tireurs” because inexperienced Wehrmacht soldiers saw partisans shooting at them everywhere. So they punished entire villages if they thought they supported the partisans.

Similar events had taken place before. During the defensive war in September 1939 in Poland, about 7,000 Polish civilians were shot in this way. Meanwhile, all German historians dealing with the Second World War in Europe admit that in September 1939 there was no organised partisan activity in Poland.

Father from the Wehrmacht

So where did the myth of the innocent Wehrmacht come from? There were many factors and circumstances for this. Some result from human nature, while others were the result of deliberate actions by German politicians. The Wehrmacht is the army. And the army is there to fight. Especially since many Germans were convinced that when they set off for Poland, and especially for the war with the Soviets, they were fighting a defensive war. It is hard to believe, but many years of propaganda of the Third Reich was effective, the soldiers believed that: the victory of “Jewish Bolshevism” meant the flooding of Europe by a “red Asian plague” and, consequently, the collapse of Western civilisation. The memory of the defeat in the Great War was also not insignificant – it played a key role in consolidating German society.

18 million German men served in the Wehrmacht, which means that every German family had a father, son, and brother there. When the war was over, the average German felt betrayed – the creators of the Third Reich and its criminal plans committed suicide, hanging their nation out to dry. Blaming deceased leaders was a convenient, though humanly understandable, defence strategy against collective guilt.

Anti-bolshevism (anti-communism) was at the root of both Nazism and the Cold War. The Germans often compensated for their guilty conscience with fear of the “Ruskis”. The trauma of Stalingrad also played an important role – brave soldiers, fighting in the horrible conditions of the Russian winter, somehow lessened the crimes of total war. The nightmare of Soviet captivity for the survivors ended in 1955 when they returned home. The Federal Republic of Germany, their new homeland, was experiencing an economic miracle, no one wanted to go back to the past. Germany was an ally of the West, and Chancellor Adenauer scrupulously used this to build a new image of his country, completely cut off from the past. The experiences from the war were not discussed at home. They rejoiced at the return of “Wehrmacht father”, and he was certainly happy to be treated as a hero by his family, or at worst, an unfortunate victim of the war.

The myth of a good Wehrmacht began to take root during the Nuremberg trials. Even then, the defence lawyers and the defendants themselves were building a dichotomous picture that survived for decades: a “clean” Wehrmacht and the criminal SS. Despite this, two of the most famous commanders, Alfred Jodl and Wilhelm Keitel, were sentenced to death in the Nuremberg trials for war crimes. However, the diaries of German generals published after the war, which were very popular among readers, played the greatest role in building the myth of the innocent Wehrmacht. Germans wanted at least one bright spot in its dark history of World War II. The greatest campaign was started by General Erich von Manstein, who maintained the propaganda myth of the Third Reich about the defensive nature of the war in the East. Evidence of the Wehrmacht’s involvement in both the total war and the Holocaust existed – the documentation returned to Germany by the US in the 1950s contained enough of it. However, disclosing it was not in anyone’s interest. The famous German historian Wolfram Wette called the genesis of the Wehrmacht myth “a collective perjury”.

Am I to build an army on lieutenants?

There was no good atmosphere in West Germany to deal with the past. When in 1955 it was agreed that the Germans should create their army – the Bundeswehr – there were accusations against Chancellor Adenauer that he had reached out for Nazi commanders. He replied half-jokingly: “Am I to build an army on lieutenants? I have to get the old generals.” And he did. The accusations of the Americans were not very strong anyway – acting pragmatically, they themselves reached out for the knowledge and experience of the German commanders who had been captured by the Americans. In January 1946, the Historical Division was established, the official team in the US Army comprising German officers. In the summer of 1946, 328 senior Wehrmacht officers already worked there. Their goal was to record the history of the war and German war experiences, especially those from the front. In this way, many criminals in Wehrmacht uniforms avoided the noose or long-time imprisonment.

In 1995, the Hamburg Institute for Social Research, in cooperation with many German historians, organised the exhibition “Wehrmacht Crimes 1941–44”. It caused a shock in Germany, it was accompanied by hysterical reactions from visitors, demonstrations and protests by neo-Nazis, and even street fights. Fortunately, it was also accompanied by a fierce discussion, which largely refuted the myth of the innocent Wehrmacht. The main organiser of the exhibition, Hannes Heer, wanted to clearly show that the Wehrmacht was a criminal organisation. According to his estimates 60–80% of the soldiers on the Eastern Front took part in the crimes to a greater or lesser extent, and almost 100% in looting and pillaging. Simple calculations show that we are dealing with 6–8 million criminals, so the problem affects almost every German family. Most German historians dispute these figures and consider them to be significantly overstated. The most cautious figures say that 5% of soldiers were involved in crimes, but this still accounts for 500,000 people. There was a lot of controversy around the exhibition. However, it fulfilled its task – no serious historian in Germany defends the thesis about a clean Wehrmacht anymore, although the crimes of soldiers are associated primarily with the Eastern Front. A German expert on the Polish-German war in September 1939, author of the book “Najazd 1939. Niemcy przeciw Polsce” [Invasion 1939. Germany against Poland] and “Zbrodnie Wehrmachtu w Polsce” [Wehrmacht crimes in Poland] said in one of the interviews that despite the previous debunking of the myth about a clean Wehrmacht, his books were severely criticised and he himself was met with aggressive behaviour. Germany still does not know anything about the crimes of its soldiers in Poland and about their cooperation in this respect with the Red Army entering on 17 September. The myth about the Wehrmacht’s actions in Poland has still not been undone.