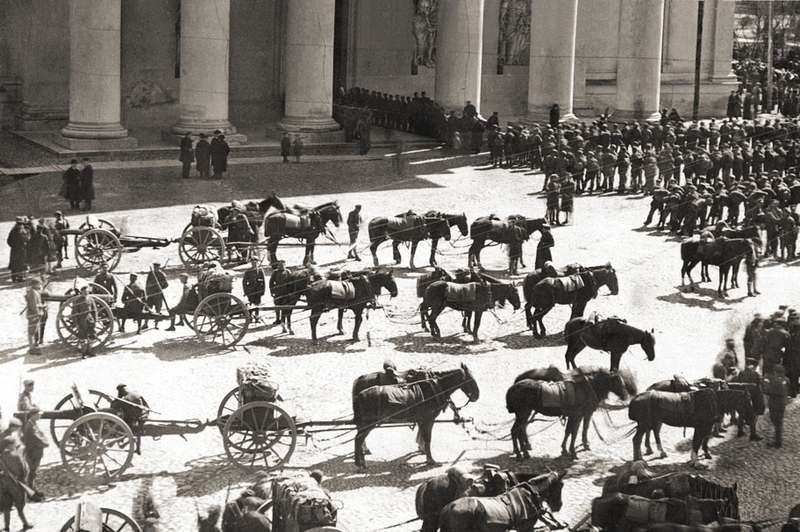 At the Polish Ministry of Foreign Affairs, the Eastern Department (especially Roman Knoll) understood perfectly well that Moscow, firstly, would not allow itself to be pushed back into the positions of the early eighteenth century, and secondly, the Bolsheviks would not give up the chance to decide the fate of their former lands and peoples according to their own particular interests. For propaganda reasons, they called such conduct "self-determination", although it actually boiled down to the creation of successive Soviet republics completely dependent on the Kremlin. Moreover, for Lenin, the war with Poland offered an opportunity to break down the barrier between the Russian Revolution and Germany, which was on the verge of similar events. For these reasons, there was no common ground between the Communist leader and the Chief of State.

Originally, all this constituted the sphere of theoretical considerations, as the two countries were separated by a German army of several hundred thousand soldiers stationed east of the Bug River. However, in January 1919, these soldiers started leaving those areas.  The resulting void was filled by Poles and Russians. The meeting took place near Bereza Kartuska on 14 February 1919, where the first shots were fired and the undeclared Polish-Soviet war began.

In 1919, triumphs were won primarily by Poles, taking Vilnius (19 April) and Minsk (8 August), among other cities. The offensive was only stopped in autumn, with the initiation of long and, as it turned out, fruitless talks between representatives of the Polish and Soviet Red Cross, among others, on the exchange of prisoners. Lenin was willing to talk due to the complicated situation within Russia due to the military activities of the so-called White movement, mainly General Anton Denikin, which threatened the stability of Bolshevik rule.

Warsaw's support for the White Guard troops, which was openly demanded by Denikin and his supporters in the governments of the Entente countries, would probably determine the fate of the Bolshevik revolution. But the White generals stood firm on the ground of recreating a single undivided Russia, seeing Poland at most within the borders of Congress Poland. They foresaw the right of Poles to build a regular administration only west of the Bug. Several months later, which was particularly dangerous for the Second Polish Republic, Lord George Nathaniel Curzon, the British Minister of Foreign Affairs, recognized this river as the line allegedly defining the limit of Polish national influence.

During the famous negotiations in Mikaszewicze (October-November 1919), the Polish side set prohibitive conditions, the fulfillment of which determined the accession to peace negotiations. An idea was put forward to create a neutral belt separating the armies of both countries. Also, it was demanded that Daugavpils be handed over to the Latvians allied with Poland, and the fighting against the Ukrainian People's Republic (UPR) troops, headed by Ataman Symon Petlura, be stopped. In addition, demands were made to stop all communist agitation among Polish soldiers.

Initially, the Bolsheviks were even willing to accept proposals relating directly to bilateral relations, but they strongly rejected the idea of giving up the battle against the Ukrainians. Consequently, negotiations were quickly interrupted, although large-scale hostilities were not resumed immediately. The conducted operations were only local, e.g. in January 1920, a group led by gen. Edward Rydz-Śmigły captured and handed over to the Latvians the aforementioned Daugavpils.

At the turn of 1920, the communists attempted to resume talks. The notes sent to Warsaw declared goodwill and a willingness for a conciliatory solution to the conflict with Poland. The unconditional recognition of Warsaw's sovereignty was emphasized, ensuring that there were no anti-Polish agreements with other partners. There were also promises to suspend further military operations.

For a long time, these notes remained unanswered. Polish political and military leaders doubted the sincerity of the announcements, the more so as the intelligence services reported the ongoing concentration of the Red Army on the front line. Hence, it was not until 27 March  1920, that Warsaw agreed to return to the table. The Poles indicated Borisov on the front line as the meeting place, at the same time proposing a local ceasefire for the duration of the negotiations. In response, the Bolsheviks did not agree to Borisov and demanded a complete halt to hostilities. Then, for a change, the Poles opposed. Formally, the whole initiative was broken by difficulties associated with finding the right geographic location to hold the talks.

In fact, Piłsudski played a game of stalling, preparing for a great offensive in the east as the implementation of his so-called federation concept. Simultaneously with the artificially prolonged exchange of notes with the Kremlin, Poland entered into negotiations with representatives of the UPR government that it recognized. These resulted in the signing of two conventions: political (21 April 1920) and military (24 April 1920). The Ukrainians accepted that Volhynia and Eastern Galicia were left within the borders of the Second Republic of Poland, and in return for these concessions, the Polish side was to provide them with the military assistance necessary to remove the Bolsheviks from Right-Bank Ukraine.

As agreed, on 25 April 1920, a Polish offensive was launched, supported by Ukrainian forces. A few days later, on 7 May 1920, Kyiv was seized. We know, however, that this success was not impressive, as the Soviet forces remained intact in the North. On 14 May 1920, the Russians took offensive action. In addition, the mounted infantry of Semyon Budyonny was brought from the Caucasus. The increasing failures of the Poles forced the then Prime Minister Władysław Grabski to commence talks, but with Western countries, on the issue of foreign aid. During the conference in Spa, on 10 July 1920, the Entente powers virtually only gave moral support to the Poles, subject to harsh conditions. Among these were the condition of concluding a truce on the Curzon line.

Successive talks between the Poles and the Bolsheviks, and subsequent diplomatic initiatives, took place in a completely different political and military setting, after the victory in the Battle of Warsaw. On 12 October 1920, peace preliminaries were signed in Riga, and hostilities ceased seven days later.

- Kruszyński M., Wydział Wschodni Ministerstwa Spraw Zagranicznych a idea rozbicia Rosji Radzieckiej w latach dwudziestych XX wieku [The Eastern Department of the Ministry of Foreign Affairs and the idea of breaking up Soviet Russia in the 1920s], [in] Ruch prometejski i walka o przebudowę Europy Wschodniej (1918 – 1940) [The Promethean movement and the struggle for the reconstruction of Eastern Europe (1918 - 1940)], ed. M. Kornat, Warsaw 2012, pp. 149–158;