Zbigniew Zaporowski:The victims of riots and robberies on 22-24 November 1918 in Lviv in the light of the findings of the Lviv Police Directorate. 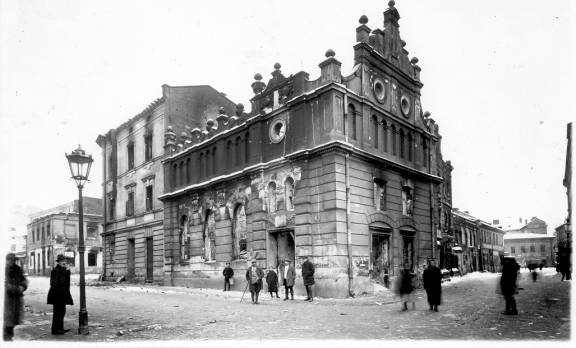 After the troops commanded by Lieutenant-Colonel Michał Tokarzewski-Karaszewicz had arrived in Lviv and after fighting during the whole day of 21 November 1918, the Ukrainians withdraw from the city by night. Lviv was free. The joy of the victory was spoiled by the events of 22-24 November, called “incidents” by Henry Morgenthau, directed above all against the Jewish community, although some victims were also Polish. In the chaos caused by the recent clashes, the military administration did not act efficiently at the beginning. Disregarding the causes and the course of the incidents, the priority was to establish the number of fatalities, whereby there are significant differences in this respect. Historical literature mostly quotes 72 murdered persons (exclusively Jewish citizens), officially published by the Jewish Committee for assisting the victims of riots and robberies in November 1918 in Lviv (called the “Jewish Rescue Committee” in historical literature)[1]. In the final report of 13 February 1919 of the Extraordinary Government Investigating Commission for the investigation of the incidents in Lviv, presided by Zygmunt Rymowicz, Judge of the Supreme Court, it was pointed out that approximately fifty Jews died, but Christians were mentioned as well (“At the time of the November Pogrom, there were about fifty Jews killed, and of these a certain number was killed by stray bullets from street fights. It is also certain that a significantly smaller number of Christians were also killed”)[2]. The “Lviv Courier” was the first to establish not only the number of victims—23—but was also the first to publish their names. They were only Jewish citizens[3]. In the unpublished report (most probably of 1919), most probably Czesław Mączyński, its author and commander of Lviv’s defence, estimated that there had been 35 victims (exclusively Jewish citizens). In his memoirs, Mączyński questioned the number published by the press, but he did not state how many persons had lost their life (“it is no longer possible to establish the number as it was not ascertained immediately”)[4]. Professor Jerzy Tomaszewski, who passed away several years ago, found and published the report of 17 December 1918 of the envoys of the Ministry of Foreign Affairs, which stated that the number of Jewish citizens killed was at least 150[5]. However, Morgenthau’s Committee counted 64 fatalities, exclusively Jewish citizens[6].

It is difficult to establish the exact number for several reasons. Firstly, it is assumed most commonly that the incidents took place from 22 until 24 November, but Margenthau, for example, gives the dates of 21-23 November, while street fighting also raged between the Poles and the Ukrainians throughout the whole day of 21 November. On the other hand, other authors, above all Josef Bendow (actually Józef Tenenbaum), believe that the pogrom took place throughout the whole month of November. There is another problem which is more complex—whether members of the Jewish Police killed on 22 November while resisting Polish soldiers, as those entered the so called Third District by pursuing the Ukrainians, are war victims or victims of violence targeted at them? The third question is: should only Jews be taken into account or should Christians be included?

The published documents list those who were killed and died in hospitals or were wounded on 22-24 November. They were drawn up by the Lviv Police Directorate and submitted to the Press and Statistics Division of the Command of the Polish Army for Eastern Galicia on 26 February 1919. The covering letter says: “The statistics gathered on the number of civilians wounded and killed from 1 November until now in Lviv, in particular on 22, 23 and 24 November 1918, are submitted. The lists covering the critical days include the finest details available. The statistics as a whole were gathered in all local hospitals and facilities of the Red Cross and were based on reports by Police agents. The only item which could not be included was the list of the hospital located in the house for the invalids on Kleparowska Street during the fighting from 1 until 22 November. On 22 November the hospital was transferred to the city centre and was located in the main guard building for two days. Afterwards, it was either dissolved or transformed into a front hospital. The research performed in the city command, the Office of the Chief of the Sanitary Service and in the Central Office of the Red Cross could neither trace the current location of that hospital nor its registration files. It should be finally added that the Police stations and branch offices are continuing their investigation to gather the statistics, the result of which will be submitted as a supplementary list to the Press and Statistics Division”[7].

The published documents stated that the number of persons killed stood at 37, which should be increased by the 7 who died in hospitals (the last victim Maria Puffi died on 4 January 1919)—the total number of fatalities amounts to 44 persons (including 11 Christians, which confirms the criminal nature of the incidents). However, Felicja Sulimirska should be excluded from the summary. A participant in the defence of Lviv, a courier from a well-known Lviv family, she was severely wounded by the Ukrainians on 21 November—she was transferred to the hospital at the technical university where she died the following day[8]. The day she was wounded was clearly specified. Why she was included in the list is difficult to establish. It should be pointed out that 3 persons, who died during the riots and are included in the list of victims, were not included in the official list of the Jewish Committee[9]. These are: Markus Verständig, Reisel Schimmel and Jakub Meuier. Furthermore, nearly all the victims were shot—there were only one person who died from a stab wound and several persons who died from blows from a rifle butt.

The documents are stored by the Central Ukrainian Archives in Lviv (Centralnyj Derżawnyj Istorycznyj Archiv), the Government Committee for Galicia, Cieszyn Silesia, Orawa and Spisz. These are copies of typescripts. The documents were prepared by following the publication rules for source documents. The notation and style and other conditions were maintained—e.g. the specification of Jewish victims by stating their religion or nationality; the interference in the text was limited to an explanation of the abbreviations in brackets. Furthermore, for the sake of transparency, certain terms such as “domiciled” or “street” were added by selected names. The punctuation and spelling were adjusted according to the current rules.

Zbigniew Zaporowski—professor of the Institute of History of the Maria Curie-Skłodowska University in Lublin. He specializes in the history of the 20th century by drawing particular attention to national minorities (Ukrainians, Belarusians, Jews), the political system of the Second Polish Republic and social attitudes during the time of the Polish People's Republic.

Stanisław Krasnoid, aged 32, bricklayer, domiciled at 41 Skarbkowska Street, murdered by a shot to the head

Felicja Sulimirska, aged 21, domiciled at 6 Senatorska Street, murdered by a Ukrainian by a rifle shot on 21 November, died on 22 November 1918

Race Berger, aged 52, Jewish, factor’s spouse, [domiciled at] 7 Wesoła Street, murdered by a shot to the abdomen by Polish soldiers during a robbery

Małka Ries, r[ecte] Kupferstein, aged 53, no profession, domiciled in Boimów 20, murdered by a shot to the head

Herman Herbst, aged 30, baker’s apprentice, [domiciled at] 129 Żółkiewskiego Street, murdered by a shot to the head

Abraham Broder, aged 65, Jewish, tiler, [domiciled at] Żółkiewskiego Street, murdered by a shot to the head by bandits during a robbery

Klara Sonntag, aged 16, [domiciled at] 5 Smocza Street, murdered by a shot to the head

Zygmunt Górna, [aged] 25, Jewish, merchant, [domiciled at] 5 Smocza Street, murdered by a shot to the head

Eliasz Sobel, aged 55, Jewish, hairdresser, [domiciled at] 22 Żółkiewska Street, murdered by blow to the head from a rifle butt by bandits during a robbery

Władysław Nieduszyński, [aged] 58, railway clerk, died from a stab wound, as per the agent’s report, stabbed by a Ukrainian with a bayonet on the street

Izralel Berl, Lipsker, [aged] 80, furrier, domiciled at 4 Cebulna Street, murdered by a shot to the head

Izydor Mesuse, aged 25, Jewish, merchant, [domiciled at] 1 Kościelna Street, murdered by a shot to the head

Dawid Rubenfeld, [aged] 19, Jewish, butcher’s apprentice, [domiciled at] 2 Small Market Square, shot in the head by a stray bullet on the way home

Samuel Aker, aged 60, Jewish, merchant, [domiciled at] 17 Żółkiewska Street, shot in the head by bandits during a robbery

Jakub Meuier, aged 60, Jewish, dressmaker, [domiciled at] 21 Szpitalna Street, shot at 22:30 by night, by a rifle bullet through the door during a robbery

Amalia Reichert, aged 29, Roman Catholic, spouse of the court official, domiciled at 9 Chodorowskiego Street, wounded by a grenade in her flat

Józef Berlstein, aged 35, [religion] Jewish, private engineer, domiciled at 12 Żółkiewska Street, wounded in the head by bandits with a rifle butt during a robbery

Ernestyna Pohlenberg, aged 21, spouse of the Jewish merchant, domiciled at 15 Starozakonna Street, wounded by a bullet in the head (as per agent no. 18, wounded by Polish soldiers on 22 November 1918)

Justyn Zwarycz, aged 55, Greek Catholic, caretaker of the building at 34 Żółkiewskiej Street, wounded with a grenade found at the street due to its own carelessness

Sprinze Goldberg, aged 39, [religion] Jewish, merchant’s spouse, domiciled on Maryi Śnieżnej Square, wounded in both legs during the explosion of a grenade

[2] Engel D, Lviv. November 1918: The Report of the Official Polish Governmental Investigating Commission, “Jewish History Quarterly” of 2004, No. 3, page 395. The report was not preserved in Polish, while the translation is not grammatically correct (“the time of the November pogrom there were actually about 50 Jews killed, and of these a certain number died from stray shots from the street fighting, just as a certain though significantly small number Christians, thus met their end”). Therefore, the author decided not to quote the document, but he reflected its content in the correct form. The works of the Extraordinary Government Investigating Commission were presented in detail by Kania L., In the shade of the Lviv Eagles. The Polish military courts, the Counterintelligence Service and the Police Services in the battle for Lviv 1918–1919, Zielona Góra 2008, pages 134–162.

[4] Derżawnyj Archiv Lvivśkoji Obłasti u Lvovi, The Lviv Historical Association for the Investigation of the Defence of Lviv and the South-Eastern Voivodeships in the years 1918–1920, 257, 1. 44, Mączyński Cz. (?), The incidents in a Jewish district in Lviv, Book 15; Mączyński Cz., The fights of Lviv, Volume 2, Warsaw 1921, page 33.

[10] From the memoirs by Prof. Tadeusz Kielanowski, it turns out that Włodzimierz Zieliński (who probably used to live in the Skarbkowska tenement house as him) was a university student and participant in the defence of Lviv. Kielanowski noted down: “he was shot by two civilians, nearly before my eyes, [...] as he returned from the front home for a while and he did not allow to confiscate other people’s horses” (comp. Nearly the whole 20th century. The memoirs by a doctor, Gdańsk 1987, page 22).