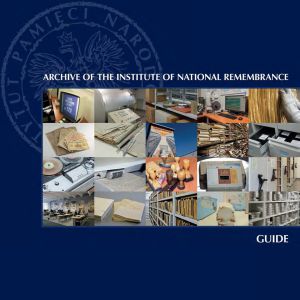 The Archive of the Institute of National Remembrance collects, elaborates on, and discloses materials related to the history of the Polish Nation between 1917 and 1990, i.e. mainly under German and Soviet occupation, and during the communist period. The Institute’s collection contains files acquired from the communist organs of repression and documents of the Second World War occupational authorities. They are now accessible to the victims of repression, journalists, researchers and public institutions. The IPN’s archival resources amount to over 91 km of files. More Information about the IPN Archive is included in the attached brochure (PDF file).

The Archive of the Institute of National Remembrance (Archiwum IPN) collects, keeps, secures, elaborates on, records and makes available documents related to the history of the Polish Nation between 1917 and 1990, i.e. mainly under German occupation and during the communist period, as well as records of the facts and circumstances relating to the fate of the Polish Nation in the years 1939-1990, and containing information on human and property losses. On their basis, the Institute of National Remembrance issues certified copies, transcripts, extracts and reproductions to victims of repression, journalists, scientists and public institutions.