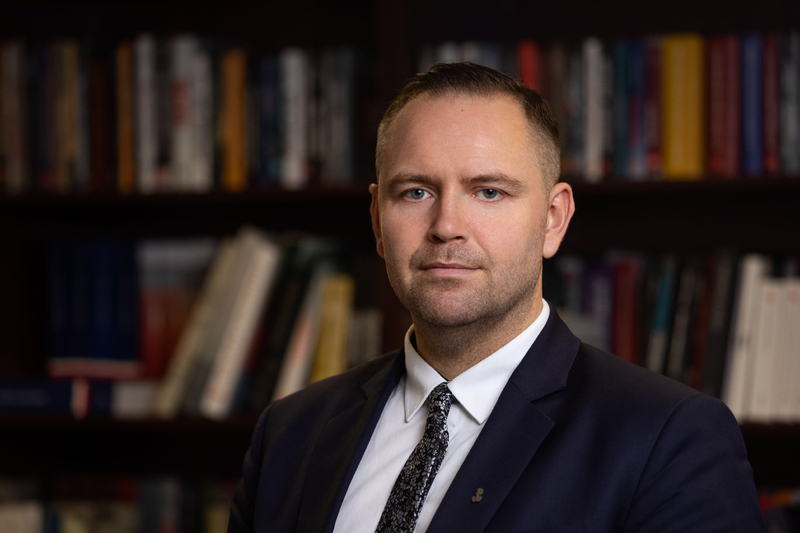 Karol Tadeusz Nawrocki (born on 3 March 1983 in Gdańsk) is a Polish historian and a social and local government activist.

He has been the President of the Institute of National Remembrance since July 2021.

He previously held the post of the Director of the Museum of the Second World War in Gdańsk (2017–2021) and the Deputy President of the Institute of National Remembrance (2021).

Karol Nawrocki is the son of Ryszard and Elżbieta. After graduating from high school in 2003, he obtained the title of a Personnel Management Specialist from the Post-Graduate School of Business and Administration in Gdańsk. He received his master’s degree at the Institute of History of the University of Gdańsk in 2008. In 2013, Karol Nawrocki obtained his doctoral degree in humanities at the University of Gdańsk. His thesis, entitled "Opór społeczny wobec władzy komunistycznej w województwie elbląskim 1976–1989" [Social Resistance to the Communist Authorities in the Elbląg Province 1976–1989], was supervised by Grzegorz Berendt, Ph.D. ,D.Sc.

He worked at the Institute of National Remembrance in the years 2009-2017, holding the post of the Head of the Public Education Office at the IPN’s Branch Office in Gdańsk (2013–2017). In the years 2011 to 2017, he also served as the Chairman of the Gdańsk-Siedlce District Council. From 2017 to 2021, he was the Director of the Museum of the Second World War in Gdańsk. He returned to the IPN in June 2021 as the Institute’s Deputy President. On 27 April 2021, the IPN Council recommended his candidacy for the post of the President of the Institute of National Remembrance.

On 28 May 2021, the Polish Seym, by 248 votes in favour, 198 against and four abstentions, elected him President of the IPN, and on 23 July 2021, by 52 votes in favour, 47 against and one abstention, the Senate agreed. On the same day, Karol Nawrocki took the post of the President of the Institute of National Remembrance  thus ending his mission as the Director of the Museum of the Second World War in Gdańsk.

A graduate of History at the University of Gdańsk, where he obtained his Ph.D. in 2013. He started work at the Institute of National Remembrance in January 2009. Between 2014 and 2017 he was  the Head of the IPN's Educational Division at the branch office in Gdańsk, where he coordinated research and educational projects. In April 2017 he was appointed to the post of the Director of the Museum of the Second World War in Gdańsk. A member of the Historical Diplomacy Council at the Polish Ministry of Foreign Affairs. An alumnus of the International Visitor Leadership Program (IVLP) established by the U.S. Department of State – “Engaging and Educating Society about Painful Episodes in a Nation's History”. An expert on the TVP3 Gdańsk historical programs: “W świetle prawdy” [In the Light of the Truth] and “Wojna i Pamięć” [War and Memory]. A member of the following Program Councils: Museum of the Sochaczew Region and the Battlefield of the Bzura [Muzeum Ziemi Sochaczewskiej i Bitwy nad Bzurą], the Pilecki Family House Museum [Muzeum Dom Rodziny Pileckich], Museum of Cursed Soldiers and Political Prisoners of the Polish People's Republic in Warsaw [Muzeum Żołnierzy Wyklętych i Więźniów Politycznych PRL]. A member of the Qualifying Commission for assessment of museum applications for entry into the National Museum Register. In 2020, he made his debut on Radio Gdańsk as the author and presenter of a series of broadcasts entitled “Historia Nieoczywista”[Unobvious History]. The author and editor of seven books and a few dozen scholarly and popular press writings devoted to the contemporary history of Poland. The initiator, consultant and co-author of many commemorative, educational and exhibiting projects, including the following exhibitions: “Walka i Cierpienie: [Fighting and Suffering] Polish citizens during the Second World War”, “Milion zza Oceanu” [A Million from Overseas], “Westerplatte w 7 odsłonach” [Westerplatte in Seven Acts], “Bądźcie bezlitośni, bądźcie brutalni...” [Be Merciless, Be Brutal...] and “Dziedzictwo utracone” [Heritage Lost]. The initiator of the World Forum of Battlefield Museums. He is involved in conveying a truthful narrative regarding the Polish experience of the Second World War to audiences abroad. Both an organiser and a participant of the international academic conference “A Pact for War. The Hitler–Stalin Collusion of 23 August 1939 from the perspective of 80 years since the outbreak of the Second World War”. He organised,on behalf of the Minister of Culture and National Heritage, the commemorations of the 80th anniversary of the outbreak of the Second World War, in the framework of which a few hundred events were held in Poland and worldwide, involving a total audience of over 33 million people. In 2019, in cooperation with the Ministry of Foreign Affairs, he initiated and coordinated the international exhibition project entitled “Fighting and Suffering”, which became the largest informational campaign of this kind in the history of Polish diplomacy. The project provided an opportunity to tell the story of the Polish experience of the Second World War in 150 locations around the world.

Community work
In the period 2007 - 2008, a member of the INDEX program Commemorating Poles Murdered and Persecuted by the Nazis for Assisting Jews. The leader of the ‘Koalicja na Rzecz Pamięci Żołnierzy Wyklętych’ [Coalition for the Memory of Cursed Soldiers] in Gdańsk. In 2013, he was one of the main initiators and co-organisers responsible for establishing the Avenue of Cursed Soldiers [aleja im. Żołnierzy Wyklętych] in Gdańsk. In 2015, his efforts resulted in the naming of one of the main streets on the grounds of the former Gdańsk Shipyard after the Blessed Father Jerzy Popiełuszko. He was a member of the Building Committee of the monument in memory of Danuta Siedzikówna “Inka”, which was unveiled in Gdańsk on 30 August 2015.

In his youth, he represented the KKS Gedania football team (1997–2000) and the RKS Stoczniowiec boxing team (2000–2004), with which  he won first place in the Polish Junior Cup Boxing Tournament in the 91 kg category in 2004. He was later both a player and the captain of the Ex Siedlce Gdańsk football team. In 2010, he founded the Martial Arts section of Ex Siedlce Gdańsk.

He is married to Marta née Smoleń.

Karol Nawrocki is the father of Daniel, Antoni and Katarzyna.

•    Bronze Cross of Merit, awarded for service in documenting and commemorating the truth about the contemporary history of Poland (2017)
•    Medal of the 100th Anniversary of Independence (2019)
•    Medal of the World Association of Home Army Soldiers awarded “For Services to the Home Army” (2018)
•    Medal of the 100th Anniversary of Independence (2020)
•    The Badge of Honour “Bene Merito” awarded by the Minister of Foreign Affairs of the Republic of Poland (2020)
•    Medal of “The Miracle on the Vistula” (2020)
•    Medal “Awarded to Poles for their services to Kazakhstan” (2018)
•    “Pamiętaj Polsko o Tych Synach Swoich” [Poland, Always Remember These Sons of Yours] - medal of the Katyn Family Association (2016)
•    “Pro Patria” medal for “exceptional merit in nurturing the memory of the struggle for the independence of the Republic of Poland”(2018)
•    Honorary Badge of the Federation of Fighting Youth [Federacja Młodzieży Walczącej] (2015)
•   “Inka” Ring for patriotic attitude and promotion of the memory of Cursed Soldiers (2016)
•    Silver Statuette of Warsaw Insurgents BohaterON in the public figure category (2019)
•    Medal “Zło dobrem zwyciężaj” [Fight Evil with Good] (2016)
•    Medal “Zasłużony dla miasta Elbląga” [Meritorious for the City of Elbląg]  (2015)

Personality of the year 2016 in Pomerania in the category of charity and social work, in a poll organized by the “Dziennik Bałtycki” newspaper.

Personality of the year 2017 in Pomerania in the category of culture, in a poll organized by the “Dziennik Bałtycki” newspaper.